TAAL VOLCANO: Lake Dries Up as Taal Continues to Erupt 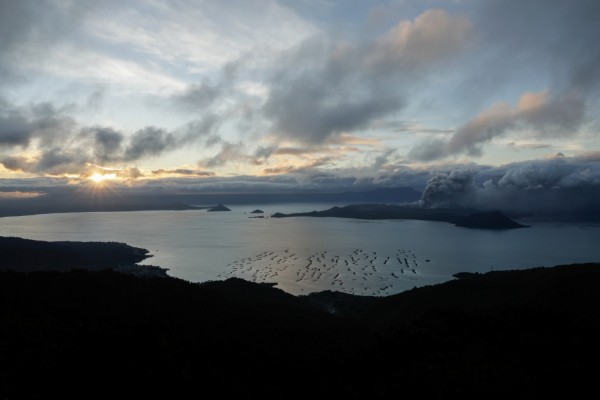 (Photo: Reuters)
It is not just the water in the crater but also the lake that surrounds the volcano is drying up.

The lake at the crater of Taal Volcano, which is a popular tourist destination, is drying up, according to the local geohazard agency.

Antonia Bornas from the Philippine Institute of Volcanology and Seismology (Phivolcs) said that the water began evaporating since the volcano first erupted on Sunday.

However, this is a normal occurrence whenever Taal shows activities, Bornas, who is the monitoring and eruption prediction chief at Phivolcs, clarified.

She added that the ground underneath the lake is either expanding or breaking apart, and it possibly causes the water to recede too. This phenomenon is called fissuring, and it happens because the magma is breaking the ground so it can push itself outside.

The larger lake which surrounds the volcano and a portion of Pansipit River -- a river connected to the lake -- also dry up because of the same reason.

Since Tuesday local time, multiple cracks have emerged on roads in Batangas, including on the towns of Agoncillo, Lemery, San Nicolas, and Talisay.

According to Bornas, this is a sign that magma or molten rock is moving toward the volcano. He added that fissures also occurred on past activities just before a major eruption.

Since the steam blast on Sunday, the seismologists have recorded at least 450 earthquakes. The strongest one is 4.1, and Bornas said that it is "strong" for a volcanic earthquake.

Born as, who recently released a journal about the previous eruption of Taal, notes the similarity of the current event to the 1911 eruption: it started with a minor eruption, following the occurrence of fissures before the major explosion.

However, she reminded me that the fissures are not indicators that a colossal eruption will indeed happen. Instead, it is just a sign that a large volume of magma is moving somewhere. She explained further that the ground sinks because its underground became completely empty after it loses the magma below.

It is also not possible for magma to flow from these holes, she also added.

There are some reported cases of fissures releasing water, and Bornas explained that the Department of Public Works and Highways said it is just a burst pipe, not boiling water from the underground.

Yet the danger still retained, since "Taal has been opened up", so she reminded the residents to evacuate.

It is reported that some residents refused to leave their homes for various reasons such as overconfidence, and they want to take care of their livelihood and pets.

Vice President Leni Robredo previously said that she asked the local government to set up evacuation centers for animals so that their owners can be at ease. The Philippine chapter of People for the Ethical Treatment of Animal (PETA) is also conducting its rescue missions for stranded or abandoned livestock and pets.

Filipinos pride themselves for their volunteerism and resiliency, and the same case is true to the three volunteers who unfortunately met a fatal car crash and died just a few hours after lending help on the evacuees.

The victims are identified as Rio Abel, Maximino Alcantara, and Darwin Lajara, all in their 20's.

According to the police report, they were driving along with San Jose town in the early morning of Tuesday local time when they hit a trailer truck. Abel and Alcantara died on the spot, which Lajara died the following morning while confined at a hospital.

The news of their deaths broke online, and people mourned as they called them heroes.