A CrossFit gym owner, along with the South African Animal Sanctuary that condoned her action, is experiencing the internet community's heated fury. She pulled a stunt that caused a tremendous amount of uproar from many concerned citizens.

Emma Roberts, an adventurer, health enthusiast, lifestyle coach, and gym owner, is under fire after doing a pull-up on an elephant's tusk while visiting a wildlife park in Mabula District, South Africa. 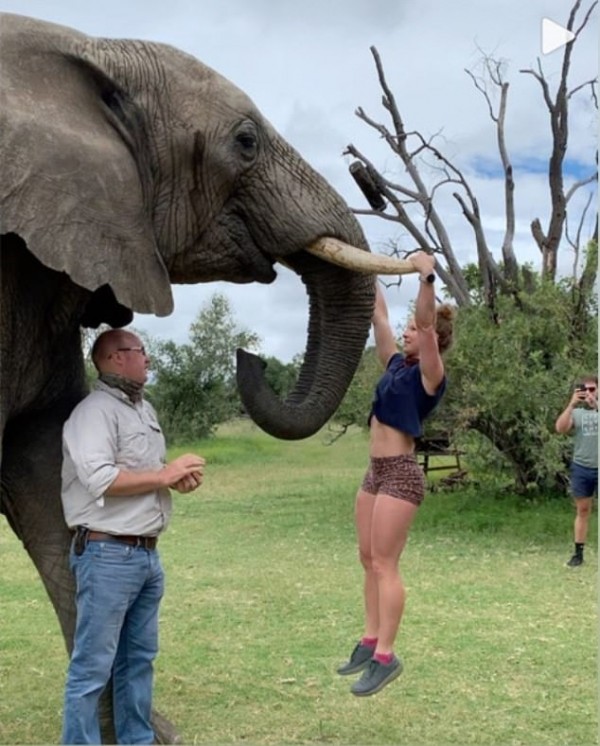 Roberts performed a pull-up on an elephant's tusk in a now-deleted Instagram post while visiting the Adventures with Elephants elephant park. The incident caught the notice of many internet users, and as the picture got more and more attention, the backlash started. A commenter even said that Roberts does not have any common sense and sympathy towards the animal, while others commented that the Elephant deserved to be treated better.

Despite the community's negative response, Roberts defended her actions saying that she disagrees, nor does she even think that sharing such a fantastic moment with a magnificent animal is cruel in any way, shape, or form. She even agreed that the animal deserved to be treated with respect, adding to her statement that what she did caused no harm to the Elephant, and it was done without any malicious intent.

However, for the sake of the marvelous facility that gave her the chance to have a magnificent experience with the great behemoths, she opted to delete her post.

"For the sake of this amazing facility, I have opted to remove my post. I do not agree that sharing an amazing moment with this animal is cruel in any way. However, there are many humans out there who only see the negative. Beating elephants is cruel, keeping them in horrible environments, and killing them for their ivory is cruel. (But) providing them home in their natural environment and educating people about how intelligent and wonderful they are is not cruelty," Roberts said.

In a snarky final remark against the people who have deliberately judged her without knowing what's happening in the picture, she said that she will be sticking to fitness posts from now on. She claimed that this statement would be tough to a fault, but there will always be people who will find something negative.

In a related news, 2020: When Lions, Tigers, Wolves, and Other Large Carnivores Were Rescued

Did Roberts "harm" the Elephant?

For years, elephants have shown their remarkably exceptional intelligence as they have been known to perform alongside humans in various activities for entertainment. They can be trained to do acts that are safe for both the Elephant and their human handler. What Roberts did was a pretty standard act between an elephant handler and the animal. It is done by every carnival and circus back when such animals were allowed to perform in such environments.

Also, animals are the largest land mammals existing today. They can flick trees and cars like it's nothing more than Styrofoam walls. It would be highly unlikely that Robert's weight caused a strain on the Elephant and its tusk.

However, despite the Elephant's sturdiness and its impressive brain capacity, doing the stunt would still be very harmful as an untrained person can get hurt or hurt the animal in the process.

For more news and updates about the animal world, don't forget to follow Nature World News