A rapidly breeding invasive blue crab species is currently wrecking the livelihood of Balkan fishermen in Albania. The menace it causes is not a pretty picture.

The invasive blue crab is disrupting the ecosystems of the region. Although this crustacean is native to the Atlantic Ocean, it started to emerge in the Adriatic waters of Albania more than 10 years ago, enabled by the warming temperatures of the sea.

Stilian Kisha, 40 years old, laments that the crabs are clever and are very aggressive. This year, he says, they see the crabs everywhere--offshore, in inland water parts, and on the coast. He says they are causing enormous damage. 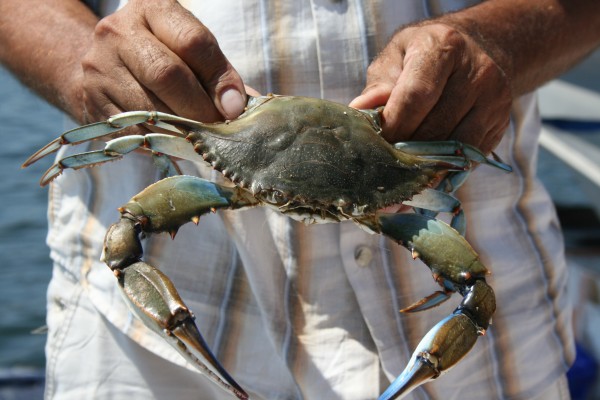 (Photo : Wikimedia Commons)
A rapidly breeding invasive blue crab species is currently wrecking the livelihood of Balkan fishermen in Albania. The menace it causes is not a pretty picture.

It has become a source of anguish for these fishermen as they struggle to eke out a livelihood. The fish they catch are exceedingly disappearing because of the crabs.

Near Karavasta Lagoon, in a marshy coastal zone, weirs and nets are being clogged by the invasive crabs. The fishermen say that the marine fishes and other native fauna that they depend on are increasingly becoming harder to catch.

Forty-four-year-old Besmir Hoxha relates how the crab takes away their daily living and the fishes in their nets, leaving them with nothing to sell.

There are days when fishermen collect 300 kilos (about 660 pounds) of the crab and only five or six kilos (11 to 13 pounds) of sellable fish. They say that stocks of eels, red mullets, and local sea bass are disappearing, while the crustacean invader destroys the delicate ecological balance underwater. Stilian says the crabs get to the fish first.

Fishermen have reason to worry because the female blue crab can lay eggs by the millions, says University of Tirana hydrobiology professor Sajmir Beqiraj.

The Atlantic Blue Crab, Callinectes sapidus, is a native of the Gulf of Mexico, thriving there but also spreading throughout the world via the ballast water of ships. It is now one of the Mediterranean's top 100 invasive species.

According to Beqiraj, climate change enables exotic species to spread to places where conditions - especially temperature - just a few years ago would have been unfavorable. C. sapidus already disrupted the ecological balance of the native populations, causing their decline and extinction, especially the local crabs.

C. sapidus also damages the seagrass beds which function as local fish nurseries. They do this by eating the snails and mussels which the fishes feed on. Beqiraj acknowledges that the damage caused to fish populations is significant.

READ: Protected Areas All Over the World Vulnerable to Invasive Alien Species

Meanwhile, the crab itself does not bring profit. It only sells for 40 cents (Euro) per kilo, while red mullets sell for 14 euros per kilo. Even if the blue crab is a delicacy, it is not popular in Albania. Fishermen are left with boatloads of unsold crab. Hoxha says there is no crab market. In addition, unfrozen exports are banned in the E.U., thus preventing their sale elsewhere as well.

This leaves the fishermen no choice but to let the crabs die in the sun. Twenty-seven-year-old fisherman Adrian Kola says they prevent the crabs from breeding by throwing them away. He says a solution must quickly be found, or else the crab's invasion might be as hard to control as COVID-19.