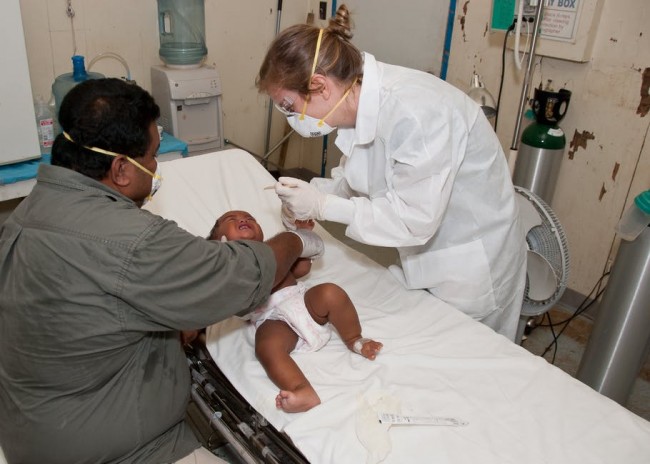 A study led by researchers from Stanford University and published in the Journal Nature Sustainability has determined that an increase in infant mortality is due to the rise in air pollution from the Sahara Desert.
(Photo : Pexels)

A study led by researchers from Stanford University and published in the journal, Nature Sustainability, states that an increase in infant mortality is apparently due to the rise in air pollution from the Sahara Desert.

The researchers have used and analyzed household surveys that span fifteen years, covering about one million births across 30 Sub-Saharan African nations. They explained the birth and death data in relation to particulate matter levels brought by dust storms. The researchers studied if there is an association between poor air quality and children's health and mortality.

The study has determined that infant mortality in specific geographical locations or regions rose due to dust and climate change. For the mortality rates to decrease, the problems must be addressed.

Recent developments in medical science have greatly helped in creating a decline in infant mortality, which has been seen as especially hopeful for developed and developing nations. Additionally, advancements and adequate vaccination programs, breastfeeding, and focus on maternal nutrition have gradually addressed the problem resulting in an evident drop in infant mortality.

IN CASE YOU MISSED IT: Saharan Air Layer is More Resilient This Year: Dust so Thick, It Can Be Seen From Space

Marshall Burke, a senior author of the study and associate professor of Earth system science at Stanford, has acknowledged that Africa, as well as other developing regions, have made significant improvements in child health and, overall, have created remarkable strides in recent decades.

However, in some places, infant mortality has remained high. Infant mortality is the number of children per 1,000 live births in an area who dies before reaching their first birthday.

Burke and the team wanted to identify why this seemingly stubborn outcome remained and whether this was related to air pollution, which is known as a cause of poor health. The researchers have explained that children are vulnerable to minute airborne particles or particulate matter from air pollution.

OMG: The Year 536 Has Been Tagged as the Worst Year Ever

These pollutants and dust particles may seem invisible but are known to be a leading cause of a wide range of health problems, particularly in young children below five years of age. Some of the health issues brought by these pollutants include growth retardation or low birth weight within the first year of a child's life.

Overall, life expectancy in children is shortened due to exposure to air pollutants. Some studies have suggested that the overall life expectancy of individuals growing up in areas with high air particulate matter or air pollution is reduced by several years.

The researchers have determined that an increase in local particulate concentrations in West Africa directly increases infant mortality. Protecting children from air pollution, particularly in regions in Sub-Saharan Africa as well as in other developing areas, is challenging given that homes usually have permeable roofs and open windows. Wearing of masks is not as common, and infants and young children are unlikely to wear masks.

The researchers have suggested instead to explore the use of groundwater to dampen sand in the region to prevent it from becoming airborne. They have also estimated that around 37,000 infant deaths may be avoided through the deployment of solar-powered irrigation systems in the desert area.