Ancient Pipe Found to Contain Smooth Sumac and Was Smoked 1,400 Years Ago 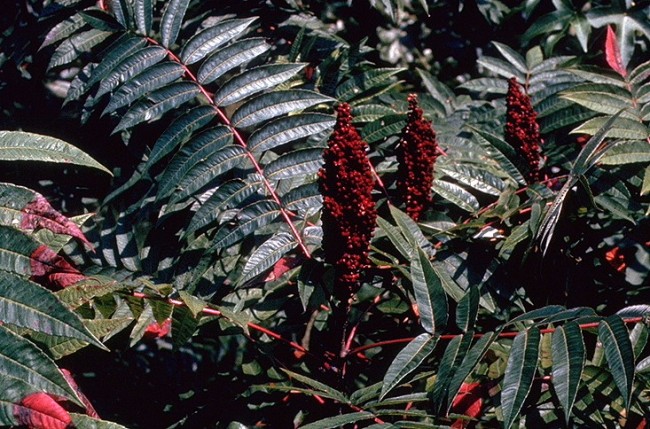 An image of Rhus glabra or smooth sumac. A non-tobacco plant was identified in an ancient pipe for the first time, and researchers found that ancient people in what is present-day Washington smoked Rhus glabra, commonly called smooth sumac, over 1,400 years ago.
(Photo : Wikimedia Commons)

A non-tobacco plant was identified in an ancient pipe for the first time, and researchers found that ancient people in what is present-day Washington smoked Rhus glabra, commonly called smooth sumac, over 1,400 years ago.

A research team from Washington State University (WSU) made this discovery when they identified its residue from an ancient archeological pipe. It was a scientific first. The scientists published their study in the Frontiers in Molecular Biosciences journal.

The pipe was excavated from central Washington. Before this discovery, the ancient peoples' use of particular plant mixtures for smoking was only speculated on. According to lead author and University of Chicago researcher Korey Brownstein, smoking had a ceremonial or religious function for Native Americans.

The authors think that the plant could have been mixed with the tobacco for the smooth sumac's medicinal properties and flavor-enhancing effect. They discovered the plant through a new metabolomics-based analysis, which is capable of detecting thousands of metabolites and plant compounds in the residues contained in archeological artifacts such as bowls and pipes. These compounds are then used for identifying what plants were consumed or smoked.

According to co-author and WSU Institute of Biological Chemistry professor David Gang, the technology marks a new archaeological chemistry frontier. In the past, residues of ancient plants were identified using the detection of only a few biomarkers like caffeine, cotinine, anabasine, and nicotine.

Gang says that while the presence of a nicotine biomarker shows that tobacco was used, it does not identify what particular species of tobacco was smoked. In addition, Gang says, if only a handful of specific biomarkers were being used, it would not tell scientists what other plants which do not have these biomarkers were contained in the artifacts.

In ancient pipes, this was the first plant identified that was not tobacco. The work of the authors also helped in elucidating the complicated evolutionary path of the trade of tobacco during the ancient American Northwest periods. An analysis of another pipe used in the Central Washington area after contact with Europeans revealed three different species of tobacco that was cultivated by the east coast natives of North America.

This pioneering research work can help other researchers identify plants that ancient people consumed and provide valuable knowledge on plant-human dynamics. The research team also helped confirm the connections of ancient practices for plant management with the traditions of indigenous communities of today.

The authors shared their results with the Nez Perce tribe. Tobacco smoking is a tradition that is sacred for northwestern Native American tribes, and prior to the study, they couldn't tell what tobacco plants were smoked by their ancestors.

Brownstein said they grew the plants in a greenhouse and gave millions of their seeds so to the Nez Perce tribe so that they can re-introduce the native plants to their native land. She says such projects are essential in building trust with tribal communities.