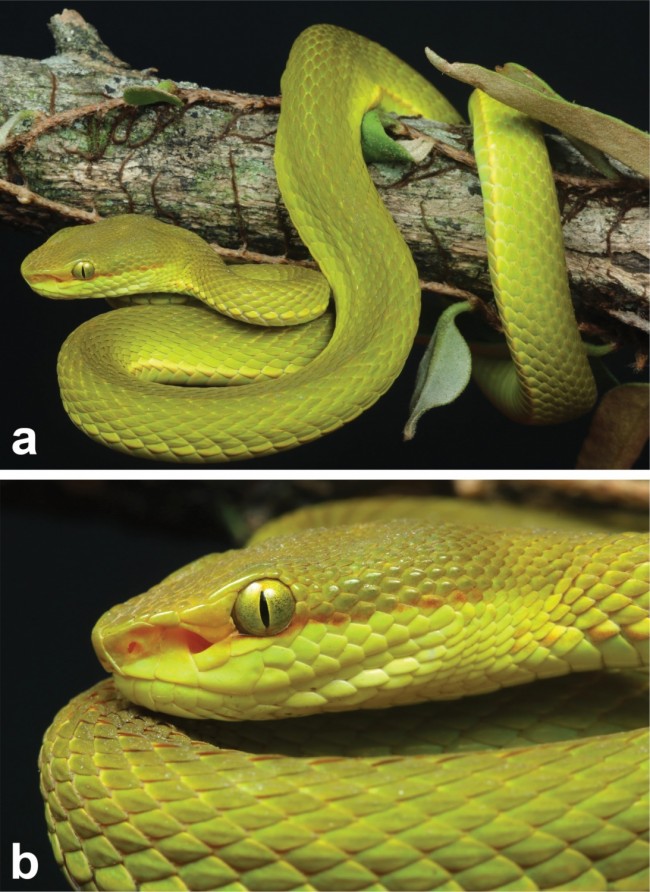 Trimeresurus salazar. The new species of Pitviper. Researchers from India’s National Centre for Biological Sciences, Bangalore as well as the Bombay Natural History Society discovered a new species of venomous green pit viper. They named the animal after one of the founders of Hogwarts School of Witchcraft and Wizardry
(Photo : Mirza, Z.A., et. al 2020, Zoosytematics and Evolution)

Scientists have recently honored the fictional world of Harry Potter. A team composed of researchers from India's National Centre for Biological Sciences, Bangalore as well as the Bombay Natural History Society discovered a new species of venomous green pit viper. They named the animal after one of the founders of Hogwarts School of Witchcraft and Wizardry. They recently published their findings in the Zoosystematics and Evolution journal.

Salazar Slytherin was among the four founders of Hogwarts. His co-founders were his friends Helga Hufflepuff, Godric Gryffindor, and Rowena Ravenclaw. They were among the most powerful wizards and witches in the fictional Harry Potter universe, and the four houses of Hogwarts were named after them.

Slytherin can communicate with snakes, a skill known as Parselmouth. The Slytherin house has a snake as its symbol. The research team was inspired by Salazar and named their newly discovered snake as Trimeresurus salazar. The team also suggested the common name of the snake to be Salazar's pit viper.

The pit vipers from the Trimeresurus genus are venomous snakes. They can be found throughout Southeast and East Asia. Trimeresurus salazar was discovered in the region of Aranachal Pradesh, India, joining no less than 48 extant Trimeresurus species in this region. The discovery was made in a research expedition conducted there from June up to August of last year.

Among the snake's distinguishing characteristics is the presence of an orange-red stripe in the male located at the side of its head. Harshal Bhosale, a researcher from the Bombay Natural History Society, also said that the species has more teeth compared to other species of pit vipers, and the structure of the reproductive organ of the males is different.

Researchers said that there is little that is known regarding the biodiversity in the Himalayas. Arunachal Pradesh, the site of the snake's discovery, is part of the so-called Himalayan biodiversity hotspot.

Mirza added that Trimeresurus salazar is the second species that have so far been discovered in the Arunachal Pradesh expedition, which reflects poorly on the state of documentation of the existing biodiversity in the north-eastern region of India. Mirza said that dedicated surveys in the future in this region will help improve it.

The region's biodiversity is currently under threat from development activities which include agriculture, hydro-electric projects, and road widening. It is not only marine turtles or sea birds that ingest plastic now. In 2017, a snake was found vomiting an empty plastic softdrink bottle in Goa in India.

Mirza says that the team members are all very big fans of J.K. Rowling's wildly popular Harry Potter books and movies. They initially wanted to name the pit viper after Nagini, which was Lord Voldemort's pet cobra. Voldemort and Nagini are also characters from the series. They decided to save the name should they discover a new cobra species in the future.

The naming of the snake after a Harry Potter character is their way of honoring and thanking Rowling, its creator.