The public opinion about the need to solve climate change is far more united in Australia than in the United States, a study revealed.

According to the research conducted by the US Studies Centre at the University of Sydney, there are a lot of Australians and Americans who think human activities have made significant contributions to climate change. However, when it comes to supporting new policies to solve the crisis, there are significant differences.

At least 78 percent Australians agreed that fossil fuel must be reduced, while 64 percent would support the "carbon tax" which aims to make the fuel more expensive and less in-demand. It is a bit higher when compared to the US voters, with 68 percent and 54 percent, respectively. 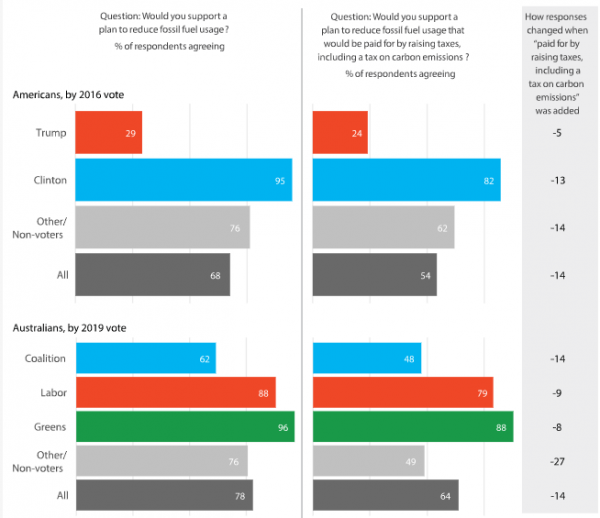 The study also provided sub-categories, depending on which candidate the voters supported. Sixty-two percent of Morrison government's supporter backed less fossil fuel, while 48 percent think higher taxes is a necessity. Voters of losing parties, Labors (88 percent and 79 percent) and the Greens (96 percent and 88 percent) have shown overwhelming support for these policies.

American voters were only divided into two -- pro-Trump and pro-Clinton. Majority of the supporters of the losing Democrat candidate have agreed with the proposal, with 95 percent and 82 percent respectively. As for Trump, only 29 percent and 24 percent think it is necessary.

It also appears that the Trump supporters were the only group which majority believe that human activities have no impact on climate change, with 70 percent.

The study was conducted in late July, a few months before the bushfire crisis in Australia.

According to political science lecturer Shaun Ratcliffe, it is still unknown if the wild life have changed the opinion of the non-agreeing Australians but he did say that it could have an impact.

Ratcliff said that the survey result is a proof that there is a significant difference between the opinion of Australians and Americans.

He also said that Trump's political approach is unlikely to be accepted in Australia as the Australian public has a strong opinion about climate change and "they want action".

When asked the other Australian parties, who have a more ambitious platform for the crisis, lost, Ratcliff explained that the public might not be confident on these "major changes" they are proposing, causing them to lose support.

The sample size of the survey on both countries is 1,800, with marginal error of 2.3 percent in Australia and 2.8 percent in the United States. The questionnaire was distributed online by the global data company YouGov.

Yet there is an inaction...

The southern region of Australia has been burning since last October, and scientists claimed it was because of the climate change. And yet it did not receive a lot of attention during the parliamentary sittings held earlier this month, which left them "bewildered".

Rather than discussing changes, energy minister Angus Taylor's fued with American author Noami Wolf, who called accused him of being antisemistic, was discussed more.

Climate scientist Sarah Perkins-Kirkpatrick from University of New South Wales said that she was surprised that even after a horrible bushfire that chokes Sydney, she never heard any politicians addressing climate change.

During the UN Climate Forum on Sunday, the Morrison government drew criticism for "cheating" on the carbon emission agreement by taking advantage of its loopholes.

The said agreement, which was signed in December 2015, aims to limit the increasing temperature to 1.5 degrees Celsius by reducing greenhouse gases emissions.