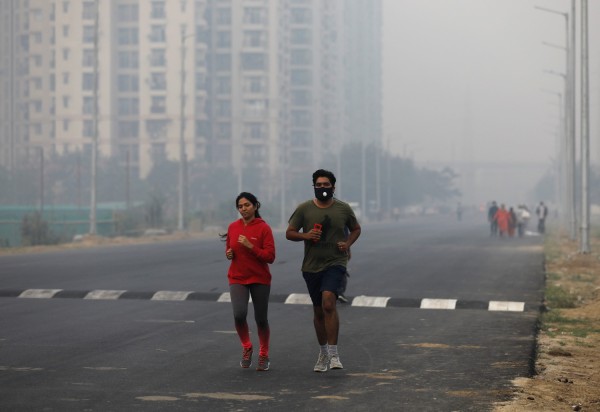 The situation of the smog problem in the capital of India has not shown any significant improvement -- even after two weeks.

As of Wednesday, the overall air quality index in the city had reached 494, the monitoring agency, the System of Air Quality and Weather Forecasting And Research (SAFAR) of the Ministry of Earth Science, reported. Although it was lower when compared to 743 on November 3, it was still considered as a severe level which is way higher than the acceptable level of 100.

And the city will not experience any relief any time soon, government agencies confirmed. As the temperature cools down due to winter season from nearby countries, the city's suffering might be extended for weeks more.

But what prolonged it?

The cold weather is causing the air not to rise high enough, and the pollutants are ended up trapped close to the ground, said Anumita Roy Chowdhury, an executive director at Delhi-based research organization Centre for Science and Environment.

But crop burning in Haryana and Punjab, nearby states, has worsened it again. According to SAFAR, it was accounted for 25 percent of pollution to the capital.

Experts explained that it was brought to New Delhi through the northwestern winds. Then, due to sudden wind speed dip along with the denser air caused by the temperature, the pollutants accumulate, said Kuldeep Srivastava, the head of the regional weather forecasting center of India Meteorological Department.

The condition might get a bit better on November 15, experts also said.

The mentioned states were previously criticized by the Chief Minister of New Delhi, Arvind Kejriwal, in his Twitter account.

Aside from crop burning in Haryana and Punjab, officials named 13 "hotspots" that contributed to problems.

The RK Puram was included on the list due to intense vehicular emission caused by huge traffic jams.

The same case was applied in Dwarka, who suffered from a horrible public transportation system and inadequate road spaces to cater to the increasing number of private vehicles.

Factories were also blamed in Anand Vihar, but emissions from buses are also a factor. The local terminal houses up to 4,500 buses, which mostly came from neighboring states that do not have stricter regulations.

Despite strict regulations imposed by anti-pollution agencies, waste burning has been a common practice in Jahangirpuri. Unfortunately, the waste in the area is so abundant that combustion has become the only option to dispose of it.

Lastly, just like Dwarka, narrow roads had caused intense traffic jams in Bawana and Narela. Road widening is not even an option due to how highly populated the place is.

The air quality index is measured through the level of PM 2.5, a less-than-2.5 microns in diameter polluting matter that can enter the lungs and bloodstream. Anything above 100 is considered unhealthy, and 301 and above are hazardous.