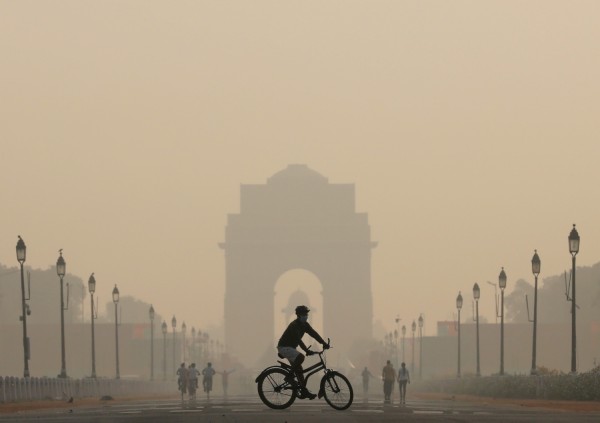 (Photo : Reuters)
The New Delhi is considered as the most polluted city in the world.

The government of New Delhi will be distributing at least five million face masks to children as the city struggles against toxic smog.

As of Friday afternoon, the air quality index of the capital of India shot up as high as 743 – a level that is already considered as hazardous. The "acceptable" level is only until 100, according to AirNow.

Through his official Twitter account, Arvind Kejriwal, the Chief Minister of New Delhi, announced the distribution of face mask to school children on Friday. He compared the current condition of the City to a "gas chamber" and blamed Punjab and Haryana, which are the neighboring states, for it because of extensive crop burning.

It is very imp that we protect ourselves from this toxic air. Through pvt & govt schools, we have started distributing 50 lakh masks today

I urge all Delhiites to use them whenever needed pic.twitter.com/MYwRz9euaq — Arvind Kejriwal (@ArvindKejriwal) November 1, 2019

Crop burning is done to prepare the land for the next season. According to a 2015 study, burning one ton of straw will emit at least 1,460kgs of carbon dioxide among other things. This has been illegal in New Delhi and Haryana since December 2015, but based on NASA's real-time satellite fire trackers, some people are still doing it.

Moreover, this practice usually coincides with Diwali, a Hindu tradition that involves lighting a lot of firecrackers.

Yearly, this festival always causes a smog problem in the city. The demand for air purifiers increased considerably because of this problem. Students have also protested against the massive usage of firecrackers, with some of them saying, "Burn your ego, not firecrackers!".

This year did not get any better. On October 24, the air quality index has reached 256.

If the air quality did not improve within 48 hours, the city will be put on a "state of emergency," a Central Pollution Control Board official told CNN. If it pushes through, school operations and ongoing construction works in the city will be suspended. The vehicles will also be specially regulated.

Before the toxic smog crisis, the government has already proposed the "odd-even" coding scheme. Meaning, cars with odd numbers can only be driven on odd dates and vice versa.

Vehicles are especially targeted because a study in 2006 reported that 72% of the pollution in New Delhi came from private cars. Unfortunately, the government still has not released any new figures as of now.

The government also reported that New Delhi has the highest total number of registered motor vehicles in the entire country, with 8.8 million. They hoped to decongest the traffic by taking out four million cars every other day through the coding scheme they're proposing.

Whoever get caught breaking the rules will be paying 4,000 rupees ($56). However, there will be some exemptions like senior leaders in the government, cars with only female or student passengers, and police cars.

Aside from private vehicles, trucks will be temporarily banned from entering the city.

New Delhi, as of writing, is now considered the most polluted city in the entire world.