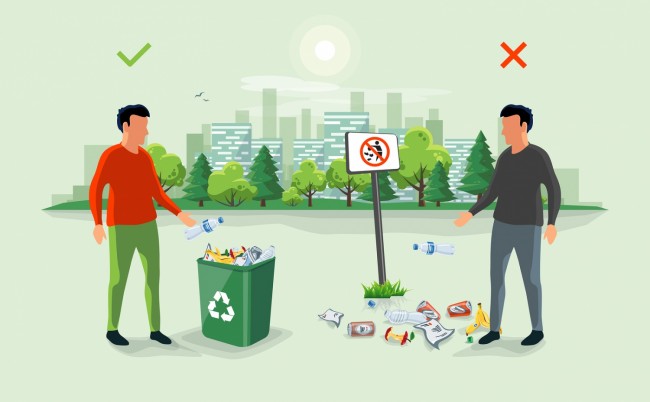 With the growing awareness of the importance of keeping our environment clean, there's more emphasis on common behaviors such as littering. However, it's a struggle to change a habit.

Many organizations, individuals, laws, and even a commercial sign company are doing their share. The new initiatives, creative techniques, and environmental signs are all steps towards a cleaner future. They are reminding people of the importance of this task.

We all must start doing the same. So, today's focus lies in getting more educated about littering, as well as promoting some of the most significant campaigns against it.

Firstly, it's vital to understand the types of waste - non-organic and organic. The former poses a much larger issue, as it comes from non-renewable natural resources. It degrades over hundreds of years, if at all.

For a point of reference, let's take a look at degrading times of certain types of waste:

Now, that puts things into perspective. The production of plastic globally is still on a rapid increase. In the US, only 9% of plastic products get recycled each year. Most of the remaining 91% end up in landfills, in our waters, and soils.

In many states, litter laws have been introduced to help hinder inappropriate disposal. In some countries, these rules are quite strict. At times, they even lead to jail time or up to $1000 in fines.

To help maintain these laws, any individual may call their local department for environmental protection to file a report.

The Cost of Littering

The Keep America Beautiful research showed that over 51 billion pieces of waste end up on American roadways annually.

The cost of cleaning up this litter costs up to $11 billion each year. Businesses pay the bulk of the price, while governments and non-profit organizations pick up the rest.

Persistent litter has an impact on the community economy as well as our quality of life. It even influences property values and housing prices.

If the environmental consequences weren't enough, these facts could do more to persuade organizations and individuals in the importance of tackling this problem.

Keep America Beautiful is the leading community improvement non-profit organization in America. Earlier this year, they awarded 50 grants to their affiliates to combat cigarette litter.

Since the national initiative was established, communities in 48 states, as well as Puerto Rico and Canada, implemented the action. Until now, they managed to reduce cigarette litter by 50% on average.

This organization has been launching initiatives for the past 60 years. They decided to tackle this problem after significant research has shown that even 'non-litterers' don't consider cigarette buds waste.

Over the years, there have been many creative, even counterintuitive, tactics to raise awareness, and reduce littering. Below, there are some of the most popular and successful, active today.

Keep Georgia Beautiful is one of the many organizations under the jurisdiction of Keep America Beautiful. Georgia is aware of the detrimental effects litter has on their quality of life, and this community is doing its share in fixing it.

Along with their affiliates, they collected 2,6 million pounds of litter in the previous year. They aren't stopping there, either, as this organization is only increasing in importance.

The Texas Department of Transportation designed this campaign to communicate a litter-prevention message. They also tackle other issues related to environment protection. Since 2009, this campaign led to a 34% reduction in roadside litter.

This campaign saw much success because it targets the pride in the local community.

The Hubbub Foundation organized this campaign across London and Edinburgh in an attempt to create positive reinforcement. It stands out because it makes people stop and think.

Most trash cans get unnoticed, but these stand out. The bins come in the form of a double slot 'ballot' where passers-by can vote with their waste. The questions are fun and engaging, increasing the effectiveness of this campaign.

The success is evident, too, as 29% of all street waste ended up inside the cans.

This campaign started in Stockholm, Sweden. McDonald's began encouraging people to trade their cans for food. Afterward, many restaurants in the chain now accept 'cash, cards, and cans.'

This campaign was launched in the attempt to make Jersey beautiful, not chock full of waste, especially during the summer. Thus, it focuses most on the junk on its beaches.

It works to raise awareness about litter prevention by educating people about responsible ways to dispose of waste. Besides, they make it easier to come true by ensuring there are enough trash cans, as well as signs pointing to them.

In Halle, Germany, volunteers have set out to collect litter around the offices. They aim to create a behavioral change by letting people see volunteers picking up trash in their free time.

By seeing it, they may feel encouraged not to litter the streets. This campaign takes place once a month.

In Toronto, an organization launched an ad campaign under the slogan 'Littering says a lot about you'.

They overlap pieces of junk to create words to describe people who threw it. By doing so, they hope to make people more self-conscious about the places they leave their litter.

When it comes to preventing waste from ending up on our streets, there's something to be done on every level.

When it comes to individuals, everybody can set an example for others. Besides, having litter bags in the car or the bag, carrying pocket ashtrays, and picking up stray litter are all small acts that lead to significant changes.

Besides, those in vehicles should avoid throwing litter out of their windows. Car litter bags are a good idea, as well as car ashtrays.

Pet owners should use scoopers to clean up after their pets. Although pet waste is organic and degrades much more quickly, it's still a good habit.

The residents of each community should make sure the trash cans come with fastened lids. Besides, getting recycling bins is a must.

When it comes to this level, government leaders should first make sure their vehicles and employees set an example for others. Leading by example, encourages everybody else.

Besides, government leaders have the capability, and the responsibility, to educate the general public. Similar guidelines apply to business owners and community leaders.

Those organizing events could make sure that their festivals or other community events are 'zero waste'. There should be large cans near eating areas, useful signs, and volunteers.

Preventing littering is one of the best ways to help our planet without sacrificing too much. Imagine what would happen if everyone joined in the action! It may not be so far-fetched, either, considering the organizations, laws, and campaigns mushrooming all over the world.

We can only hope we see them progress in the future. That way, eventually, we may enjoy a cleaner Earth.