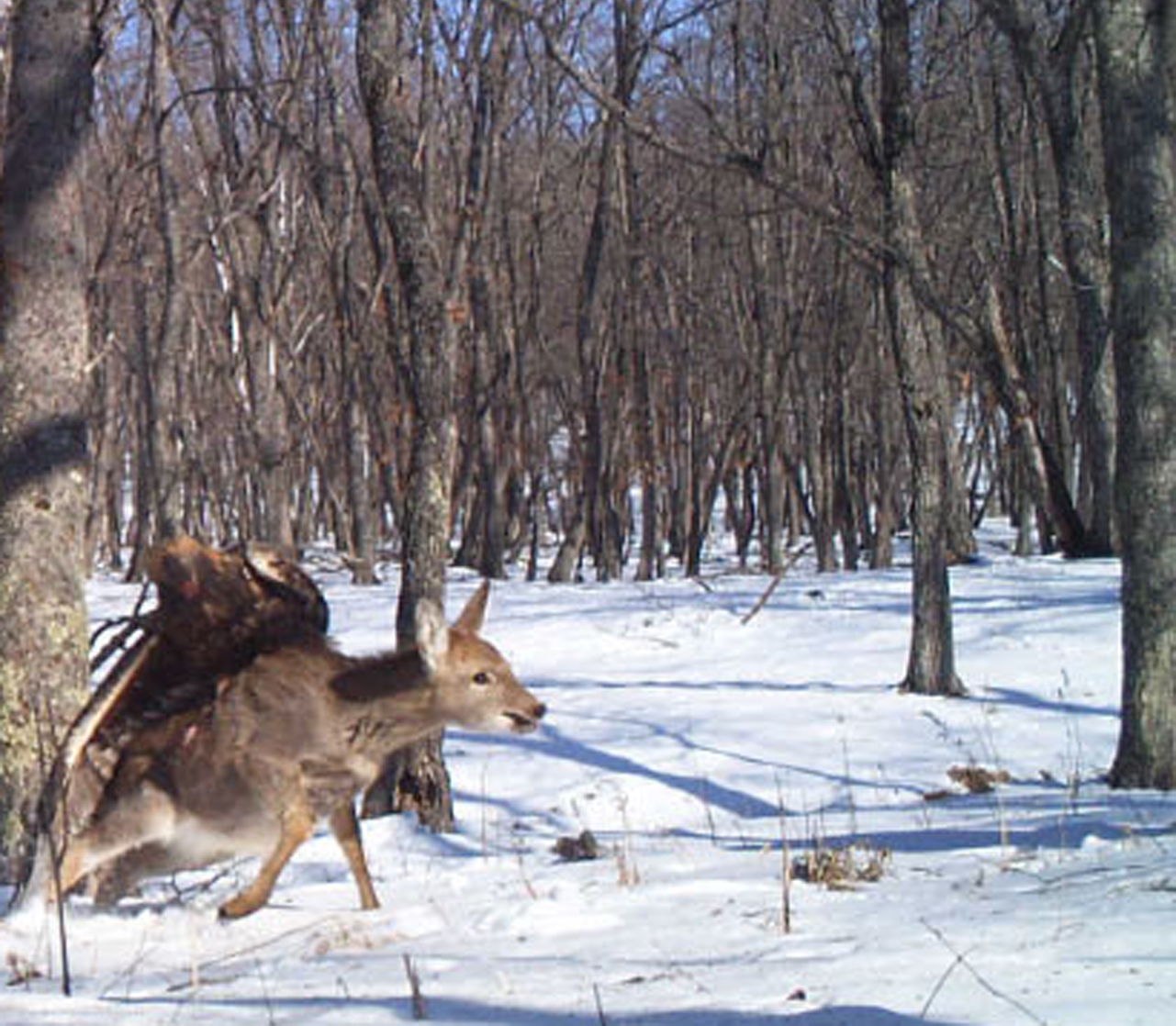 A camera trap in the forest of the Russian Far East captured a rare and surprising image of a golden eagle attacking a young sika deer.

A camera trap in the forest of the Russian Far East captured rare and surprising images of a golden eagle attacking a young sika deer.

Golden eagles are not known to attack deer, but the image of the bird latched on to the deer's back and bringing it down to the snowy ground is as clear as it is puzzling. The eagle's attack was successful, researchers later found the deer's carcass a few yards away from the camera trap.

"I've been assessing deer causes of death in Russia for 18 years -- this is the first time I've seen anything like this," said Linda Kerley of the Zoological Society of London (ZSL), who found the images so compelling that she co-authored a paper on the attack in the Journal of Raptor Research.

Kerley said she was preforming a routine check to switch out the camera trap's batteries and memory cards when she noticed the deer carcass in the snow. But something in the scene was off, she said.

"There were no large carnivore tracks in the snow, and it looked like the deer had been running and then just stopped and died," Kerley said. "It was only after we got back to camp that I checked the images from the camera and pieced everything together. I couldn't believe what I was seeing."

The camera trap is part of a series set up in the Lazovskii State Nature Reserve in Primorye in the southern Russian Far East as a means to monitor the region's Amur tigers. Kerely and other ZSL researchers have been monitoring the territory for the past six years. Camera trap images are typically recordings of common prey species and occasionally a resident or transient tiger, so seeing an image of an eagle in the act of taking down a deer was unexpected. But Jonathan Slaght of the Wildlife Conservation Society and Kerely's study co-author, said golden eagles have a well-documented history of eyebrow-raising predation attempts.

"The scientific literature is full of references to golden eagle attacks on different animals from around the world, from things as small as rabbits -- their regular prey -- to coyote and deer, and even one record in 2004 of an eagle taking a brown bear cub," Slaght said.

Slaght added that Kerley was "really lucky" to have obtained images of such a rare and opportunistic predation event.

You have already subscribed. Thank you.

7 Reasons to Have Environmental Insurance for Business

What Are the Jobs You Need a College Degree for?

Worsening Air Pollution is a 'Pandemic in Slow Motion,' Killing Millions Every Year

Russia Unveils First-Ever COVID-19 Vaccine For Animals: How Effective Is It?

Powerful Late Winter Snow Storm Hurls Towards the Western US