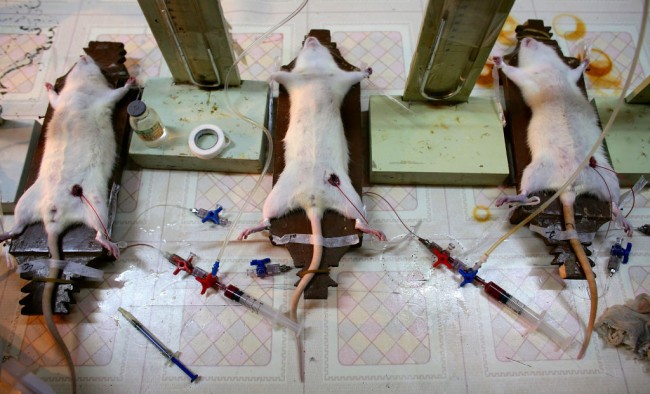 CHONGQING, CHINA - FEBRUARY 20: (CHINA OUT) White Rats undergo an hemorrhagic shock experiment in a laboratory of Daping Hospital on February 20, 2008 in Chongqing Municipality, China. During the experiment, doctors anaesthetised the rat and cut its femoral artery, making it hemorrhage. After two hours, the doctors gave it transfusion to revive the rat. The hospital uses over 10,000 rats and mice for medical research annually.
(Photo : Photo by China Photos/Getty Images)

An insulin-producing cell converted from human stem cells was shown to have cured an acute form of diabetes in mice. A 2020 study suggests that this new finding could be successfully replicated in humans.

"These mice had very severe diabetes with blood sugar readings of more than 500 milligrams per deciliter of blood - levels that could be fatal for a person," said principal investigator Jeffrey R. Millman, PhD, an assistant professor of medicine and of biomedical engineering at Washington University.

"When we gave the mice the insulin-secreting cells, within two weeks their blood glucose levels had returned to normal and stayed that way for many months."

The same researchers from Washington University School of Medicine in St. Louis that had converted human stem cells into pancreatic beta cells that make insulin had developed a new technique that was said to be more efficient.

Pluripotent stem cells are like blank slates that has the ability to grow into a cell of a different kind in the body, and many researchers tried to derive ways on harnessing its potential.

In the case of diabetes, these cells are tweaked to become insulin-producing cells that control high blood sugar. For years, animal model like experiment with mice had shown incremental success in reversing diabetes and helped understand the process of cell manipulation.

In 2016, Millman's lab had devised a way to produce insulin-secreting cells from patients with type 1 diabetes, and a few years later, they learned how to augment the level of insulin secretion in stem-cell-derived pancreatic beta cells.

"The capacity of these cells to undergo glucose-stimulated insulin secretion (GSIS) with dynamic insulin release makes them a promising cell source for diabetes cellular therapy," the authors wrote.

"A common problem when you're trying to transform a human stem cell into an insulin-producing beta cell - or a neuron or a heart cell -is that you also produce other cells that you don't want," Millman said. "In the case of beta cells, we might get other types of pancreas cells or liver cells."

"The more off-target cells you get, the less therapeutically relevant cells you have," he said.

"You need about a billion beta cells to cure a person of diabetes. But if a quarter of the cells you make are actually liver cells or other pancreas cells, instead of needing a billion cells, you'll need 1.25 billion cells. It makes curing the disease 25% more difficult."

In the recent study, the team suggests that to ensure the production of insulin-producing cells, the actin cytoskeleton which plays a significant role in cellular function, and cell differentiation as well, should be controlled.

Researchers said that the same cytoskeletal manipulations showed potential to better control the differentiation of other kinds of cells, including liver, esophagus, stomach, and intestine cells. If that's the case, this new strategy might just enhance stem cell treatments for more kinds of pathologies other than diabetes.