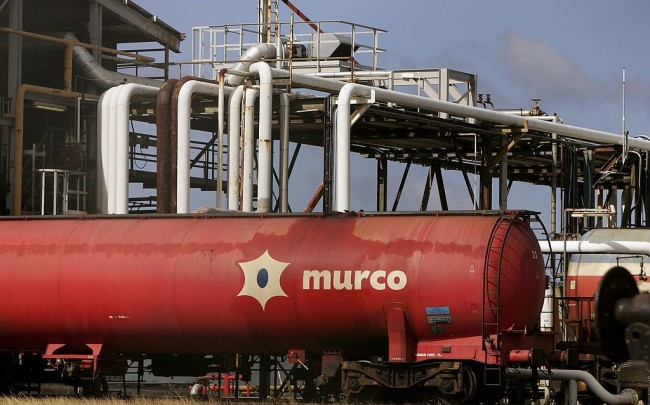 MILFORD HAVEN, UNITED KINGDOM - AUGUST 09: Pipes dominate the Elf/Murco oil refinery on August 9, 2006 in Milford Haven, Wales. Oil prices this week have hit record highs at just below $79 a barrel recorded on Tuesday. Many fear that the growing conflict between Israel and Lebanon could spread to other oil producing countries in the Middle East sparking a greater global oil crisis and ever higher prices.
(Photo : Photo by Scott Barbour/Getty Images)

New analysis warns that around 40 billion tons of carbon dioxide will be unleashed in the atmosphere if drilling and Permian Basin fracking will not end this year.

As if we are not yet in a climate emergency, the next three decades will face a catastrophic climate crisis if oil and gas executives refuse to "keep fossil fuels in the ground". While International Energy Agency and activists at the COP26 summit continue to advocate decline of fossil fuel production, Permian oil companies plan more production than ever before.

If projected extraction and drilling that has turned the Permian Basin, U.S. Southwest into 'the world's single most prolific oil and gas field' persists, nearly 40 billion tons of carbon emissions will generate by mid-century.

In the first chapter of the six-part multimedia series of Common Dreams, it was detailed how expanded fossil fuel extraction in the basin harms vulnerable communities from New Mexico to the Gulf Coast and beyond. The report reveals that global climate targets do not coincide with the current trajectory of oil and gas production in the Permian Basin.

"The Permian Basin has, for the past decade, been the site of an oil and gas boom of unprecedented scale," said research co-director at Oil Change International, Lorne Stockman. "Producers have free rein to pollute and methane is routinely released in vast quantities. Oil exports fuel Permian production growth and today they constitute around 30% of US oil production."

"If left unchecked, the Permian could continue to produce huge amounts of oil, gas, and gas liquids for decades to come. With global markets flush with Permian oil and gas, it can only be harder to steer the world's economy toward clean energy."

"With global markets flush with Permian oil and gas, it can only be harder to steer the world's economy toward clean energy."

Also read: Toxic Trees: 'The Tree of Death' Known to be So Deadly You Can't Stand Under it

A vow to tackle the climate crisis

While it is beyond the power of climate justice advocates to halt fossil fuel industry's plan to expand oil and gas production in the Permian Basin, they call on President Joe Biden to take this opportunity to meet national climate commitments.

Steven Feit, senior attorney at the Center for International Environmental Law, said that the Biden administration "must use all of the tools at its disposal to prevent the next decade in the Permian from being a repeat of the last. At a minimum, that means rejecting permits for new export facilities, petrochemical plants, and other fossil fuel infrastructure."

There's a little hope brought by the report as much of the projected carbon dioxide emissions could be prevented by simply ceasing to drill new wells.