The city of Atlanta beats temperature mark that New York City had not even reached until a day later, as well as other mid-Atlantic and Northeast cities.

Early Sunday morning, the temperature in the city plummeted into the 40s before NYC hit a low of 49. The National Weather Service (NWS) says this is the first that New York had dip below 50 F this fall, prior to that early Monday reading which came close to the latest date on record for the first sub-50 reading of the season. The record dates back to the 1860s and Oct. 20, 2005 distinction. 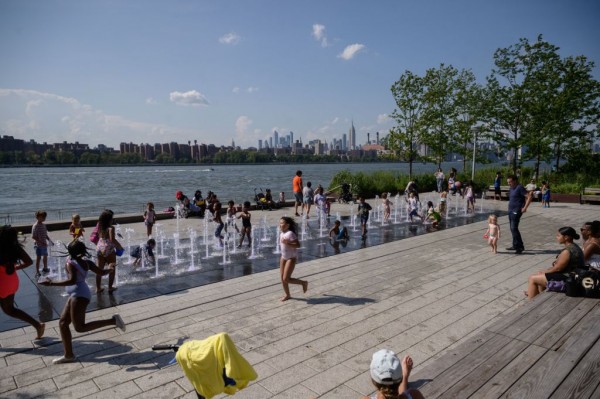 (Photo : Photo by ED JONES/AFP via Getty Images)
Children play in a riverside fountain at a park before the Manhattan city skyline, in Brooklyn, New York on August 12, 2021. - More than 150 million people across the United States were under some form of heat alert on August 12, 2021 with baking temperatures expected in the Pacific Northwest, parts of the Plains and the South, and much the Northeast.

Atlanta also breaks record with other cities for chilly weather condition along the I-95 corridor, including Philadelphia, Washington, D.C., and even Boston.

According to AccuWeather meteorologists, Atlanta went a 'little chillier', with the mercury bottoming out at 47 versus the 49-degree low in Buffalo, which is rare.

Speaking of rare, they also reported that several cities across the northern tier of the country have "rivaled the warmth observed across the southern United States," in just two weeks.

One way of analyzing unreasonable warm temperature is by looking into their averages.

Considering how both states are in mid-Atlantic and have a milder temperature average compared to the desert Southwest, that's pretty unusual.

In the first half of October, Midwest and Northeast cities consistently had warm and humid nights, while many had reached latest dip down to 40 degrees or lower, and some had yet to even reach that mark.

Also read: The Possible Effects if a Nuclear War to Hit the Planet

Low temperatures of 40 degrees or lower are not expected through the remainder of this week and paves way to a warmer weather tied to a 'delayed fall foliage season'.

Fall color is not officially tracked but anecdotal evidence from New Hampshire, New York and Connecticut indicates that this year's fall colors are "close to tying fall 2018's latest peak on record."

The summerlike warmth extends across the Great Lakes as well with above average temperatures, the highest water temperatures ever observed this late in the year.

It was observed that the lakes have warmed and contrast of warm water and cool air overhead led to the development of more than a dozen waterspouts. AccuWeather long-range meteorologists predicts bursts of lake-effect snow could develop across areas downwind of the lakes in November and December.

Another climb toward above-average temperatures this midweek after a chilly weekend is in store across the Midwest and Northeast. On the other hand, the chills will linger across New England.

So far, as energy prices continue to soar high for decades, the cool and warm condition resulted in a delay in energy bill spikes.