The Monday rain is only equivalent to a 'drop in the bucket' for several locations as over 43,000 more lightning strikes were detected in the southwest U.S. during the 24 hours preceding Tuesday morning.

The storm will most likely start the week with rare thunderstorms associated with disruptive lightning on parts of Southern California.

Los Angeles received its first measurable rain at the Los Angeles International Airport since Aug. 18, from 0.02 of an inch rain to 0.03, the third time that more than a trace fell since last March.

Thousands of lightning strikes across southern California and western Arizona 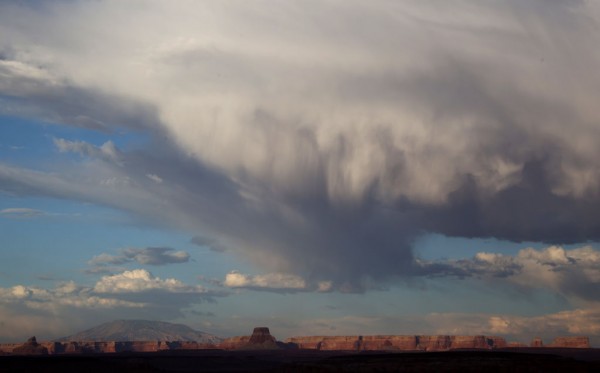 "A consequence from this much-needed rain was that the Monday Night Football matchup between the Los Angeles Chargers and the Las Vegas Raiders was delayed by half an hour due to lightning," said AccuWeather Meteorologist Thomas Geiger.

Raiders head coach Jon Gruden also expressed his frustration over the weather delay affecting the game since the SoFi Stadium has a roof overhead.

"I'm not an engineer, I have no idea. I have never heard that. I thought it was a joke, but it affected both teams," Gruden said, according to Pro Football Talk.

By Tuesday, rain and thunderstorm began to move eastward, starting in Salt Lake City with 0.01 of an inch of rain and Phoenix, just over 0.25 of an inch.

Meanwhile, rain was quite heavy in higher elevations of northern Arizona including Flagstaff and Winslow, with over an inch of rain.

Further weather development in the week

Southwest region is likely to get a break from precipitation on Thursday, but will be back to Southern California Friday, according to Geiger, as the cold front extends to the Pacific Northwest into the Rocky Mountains.

Unluckily, the heavy rain and developing lightning may slow down efforts in containing the oil spill off the coast of Southern California, and cleanup plans may need to be temporarily suspended altogether, as gusty winds and thunderstorms further complicate the operation.

By the end of the week, rains are expected to be more widespread compared to that on Monday, and cooler air and cloud behind the front could decline temperatures.

"After a high of 89 degrees on Monday, Las Vegas will only reach 74 degrees by Friday," said AccuWeather Senior Meteorologist Courtney Travis.

"Some higher elevations in Utah, Wyoming and Colorado may receive a dusting of snow," he added.

According to the system's latest update, the next storm may follow by next Monday or Tuesday, making it as far south and west as Southern California once more.