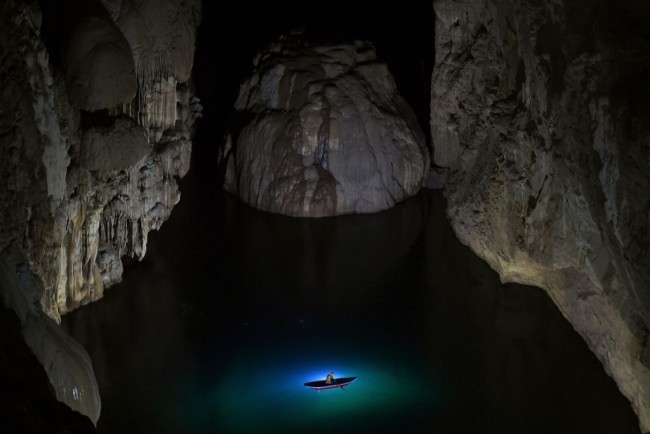 TOPSHOT - A visitor takes part in a tour in Son Doong cave, one of the world's largest natural caves, in central Vietnam's Quang Binh province on January 19, 2021.
(Photo : Photo by NHAC NGUYEN/AFP via Getty Images)

Researchers digging a tunnel network on the Rock of Gibraltar, have uncovered a new chamber that has been locked off from the rest of the world for at least 40,000 years.

This new discovery might provide insight into the Neanderthal civilization and their traditions.

Experts began exploring Vanguard Cave, which is part of the Gorham's Cave complex, in 2012 to ascertain its actual size and discover if it had sand-filled tunnels and chambers.

Last month, the team, led by Prof Clive Finlayson, director of the Gibraltar National Museum and an evolutionary biologist, stumbled found a breach in the silt that they enlarged and climbed through. It took them to a 13-metre area in the cave's top, where stalactites hung from the ceiling and broken rock curtains indicated old earthquake damage.

They also discovered six or seven scratched claw marks on the cave's walls. That sort of claw mark is usually associated with bears, and there are tiny bear remains in the cave.

Although the bones, which exhibited no cuts or markings associated with human interference, are intriguing in and of themselves, the researchers also discovered a huge dog whelk shell, which opens a world of possibilities.

The crew has found plenty of evidence of Neanderthal habitation throughout the caverns, from hearths and stone tools to the bones of slaughtered animals including red deer, ibex, seals, and dolphins. Researchers discovered four-year-old Neanderthal child's milk teeth in a hyena-infested region four years ago.

Efforts to investigate and dig the site further remain in the works, but the researchers believe the new location might offer valuable information on the life and society of these Mediterranean Neanderthals.

Modern humans - our species, Homo sapiens - developed in Africa whereas Neanderthals evolved in Europe and Asia. The Neanderthal lineage was well-established in Europe by 400,000 years ago, according to fossil evidence from Sima de los Huesos in northern Spain and Swanscombe in Kent.

The species was found throughout Eurasia, from Portugal and Wales in the west to Siberia's Altai Mountains in the east. Their populations were adaptive, existing in harsh steppe settings in England and Siberia around 60,000 years ago, and mild temperate woods in Spain and Italy 120,000 years ago.

Neanderthals possessed a long, low head (as opposed to modern humans' more globular skull) with a pronounced brow ridge above their eyes.

Their features were likewise unique. A large, broad nose dominated the middle section of the face, which protruded forward. Some experts believe this trait evolved because of living in colder, drier settings. The nose's huge interior capacity would have moistened and warmed the air they inhaled.

Neanderthals were extremely clever and successful individuals, despite their image as savage "cavemen." These were not your typical "ape-men." As a result, it is unjust to them that the term "Neanderthal" is now employed as a derogatory term.

They were adept tool builders, as indicated by spears and flint hand axes discovered during the excavation.

Around 300,000 years ago, Neanderthals invented the Levallois method, an ingenious stone technology. This entailed creating pre-shaped stone cores that could subsequently be fine-tuned into a completed tool. It meant that Neanderthals could move far from sources of raw materials while still being able to create tools when they needed them.