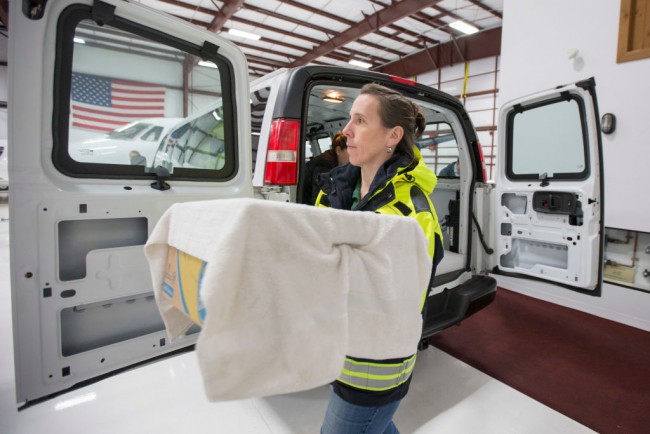 MARSHFIELD, MA - NOVEMBER 29: Boxes carrying a total of 30 Kemp's ridley sea turtles, the world's most endangered species of sea turtle, are unloaded in the hangar at Marshfield Municipal Airport before being loaded onto a plane headed for North Carolina on November 29, 2017 in Marshfield, Massachusetts. The New England Aquarium along with volunteers have rescued over 180 endangered and hypothermic turtles from Cape Cod Bay in the past two weeks and have been flying them to other locations after rewarming them at their turtle hospital.
(Photo : Photo by Scott Eisen/Getty Images)

On September 24, a wandering turtle was seen inside Japan's second-busiest airport, Narita International Airport, causing up to several planes to be delayed. The turtle caused the airport's operations to be momentarily halted for 12 minutes, creating aircraft delays.

A Turtle in Tokyo's Busiest Airport

The animal was discovered on the runway by a pilot. The pilot was ready to take off when he noticed a turtle and alerted the traffic controllers, who dispatched airport personnel to capture the critter.

The turtle, was identified as a red-eared slider, a North American species that has become invasive in Japan. which weighed over 2 kilos and was around 30 cm in length, was reportedly observed strolling over the runways of Narita International Airport, according to media sources. The reptile was removed with the aid of a net after the personnel searched the whole 4,000-meter runway area. However, the search effort resulted in a 12-minute halt in airport operations and the cancellation of five planes.

The Narita International Airport Corporation allegedly stated that runways are forced to close due to airplane components or birds, but that tiny animals are "rarely found."

The critter may have come from the airport's retention pond, which is within 100 meters from the runway, according to Narita International Airport Corporation authorities. Officials said they'll confirm the turtle's species to see whether it can be reintroduced to its native environment.

According to The Guardian, an All-Nippon Airways (ANA) Airbus A380 flight was one of seven whose departure was delayed owing to a turtle rescue effort. When the turtle appeared, the plane was preparing to take off on a journey to Okinawa, a Japanese island in the south.

The light and dark blue pictures of sea turtles on the nose of the ANA Airbus A380 are a coincidence. It was done in July to commemorate the company's service to Hawaii, where the creatures are sacred.

A coyote on the runway may appear strange, but it's a very regular sight in the Phoenix metropolitan region, even in urban areas around Arizona.

Some travelers in Arizona can thank a cunning coyote for delaying their flight. According to USA Today, the animal caused three flights to be canceled on Monday at Phoenix Sky Harbor International Airport. Perhaps he was only attempting to apprehend the rogue Road Runner.

Employees guided the coyote off the airfield and into the Salt riverbed, according to an airport spokeswoman who talked to AZ Central (a USA Today affiliate). No one was hurt, even the coyote.

Wildlife can also cause direct damage to equipment, such as the pigeon that got into a flight at Moscow's Sheremetyevo International Airport or the owl that slept inside a Virgin Australia jet engine. Fortunately, none of the animals were hurt.

Employees work to keep local wildlife away from the runway's machinery for the most part. If an animal gets in the path, it is generally moved to a safe location (humanely).