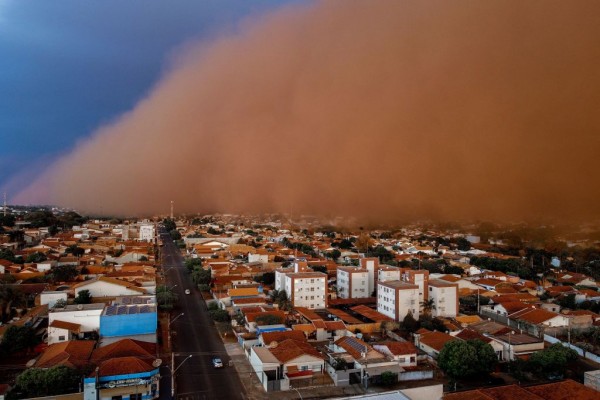 Dense clouds of dust reach up into the sky and surround sections of Barretos, Morro Agudo, Bebedouro, and Viradouro in a video published on YouTube. According to Agência Brasil, the national public news agency, residents of Ribeiro Preto, Araçatuba, Jales, Franca, and Presidente Prudente in the state of So Paulo experienced the terrible strength of the light-swallowing sandstorm. According to agency authorities, cities in a neighboring state, Minas Gerais, were also engulfed in dust.

A haboob is a storm in which powerful winds whip up a massive wall of dust that can reach hundreds of feet in height. According to the American Meteorological Society (AMS), the term "habb" originates from the Arabic word "habb," which means "to blow," and these fast-moving dust walls, which generally occur in the wake of thunderstorms, are frequent in dry regions of the world.

Haboobs are uncommon in this area of Brazil, but recent high temperatures and dry conditions in the region fuelled powerful winds that churned up a blinding storm cloud near Ribeiro Preto, with gusts of 57 mph (92 km/h), according to Andrea Ramos of Brazil's National Institute of Meteorology.

"The winds assisted in bringing the dust up from the earth, [and] the heat wave raised the temperature since humidity levels were below 20%," Ramos said in a statement.

On the other hand, residents of So Paulo shouldn't expect another dusty haboob any time soon, according to Ramos. "We won't have the conditions favoring such a catastrophe again," she added, referring to the beginning of colder temperatures in northern Brazil and the predicted rain this month.

Strong winds transport enormous volumes of sand and dust from bare, dry soils into the atmosphere, causing sand and dust storms. Scientists have realized the consequences on climate, human health, the environment, and many socio-economic sectors during the previous decade. Members of the World Meteorological Organization (WMO) are at the forefront of assessing these consequences and developing products to assist preparedness, adaptation, and mitigation measures.

In dry and semi-arid areas, sand and dust storms are typical weather dangers. Thunderstorms - or severe pressure gradients associated with cyclones - increase wind speed over a large region, which causes them. Strong winds carry enormous volumes of sand and dust up into the atmosphere from bare, dry soils, carrying it hundreds to thousands of kilometers distant. Dust particles from wind erosion account for 40% of aerosols in the troposphere (the lowest layer of the Earth's atmosphere).

The dry regions of Northern Africa, the Arabian Peninsula, Central Asia, and China are the primary producers of these mineral dusts. Australia, America, and South Africa, in comparison, provide modest but significant contributions. Global dust emissions estimate ranges from one to three Gigatons per year, based primarily on computer models.