A 6.0 magnitude earthquake struck Greece this Monday, resulting to one casualty and 11 injuries on the island of Crete, located in the south of Greece, near Heraklion, city in Crete.

The earthquake occurred at 9:17 a.m., local time and also shook some parts of Turkey. According to a local news site, over 1,000 houses are damaged and uninhabitable.

One casualty was trapped under the collapsed roof of the church of Prophet Elias in Arkalochori, which was under construction at the time when the earthquake hit. 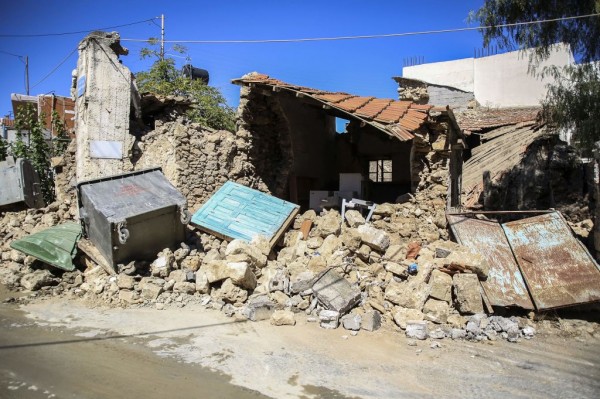 (Photo : Photo by COSTAS METAXAKIS/AFP via Getty Images)
TOPSHOT - A photograph shows a demolished house following an earthquake, in Arkalochori village on the Crete island, on September 27, 2021. - A strong earthquake struck the Greek island of Crete early on September 27, 2021, killing a man who was working in a church that collapsed and injuring nine others, the civil protection agency said.

Shops, residential properties, and other buildings were also reported damaged. Meanwhile, another one was trapped in his home in the village of Patisidero, Greece.

Much of Arkalochori, Greece had reported structure damages. Meanwhile, schools and hotels were evacuated across Crete, Greece.

Moreover, there was a report of damage to water supply networks following the earthquake. Arhanon Asterusion Mayor Manolis Kokosalis said that water pipes had been broken in the task area, prompting the school evacuations.

Subsequently, local authorities issued tsunami warning on the island of Crete. Residents in the village near the epicenter populated the streets to seek safety from rough fragments and debris of damaged buildings. Some roads in Crete were closed as well due to a landslide, causing a car to crash.

The epicenter of the earthquake was determined to be at a depth of 9.62 kilometers. In addition, aftershocks reached a magnitude of 4.6 south of the original quake and 4.5 to the north. A few were even felt as far as Athens, Greece, and Izmir, Turkey.

"[On Monday], high temperatures are forecast to reach the middle 70s to lower 80s Fahrenheit (24-28 degrees Celsius) across the largest of the Greek Islands, Crete," said AccuWeather Meteorologist Alyssa Smithmyer.

"Conditions should remain sunny, with a few clouds developing on Tuesday, ideal for cleanup. Very little rainfall is in the forecast this week, however, there is a chance for a brief thunderstorm to pass over the island on Wednesday," according to Smithmyer.

As the earthquake shook almost all parts of Crete, there are recent reports that the shaking was felt as far as Santorini. The Geodynamic Institute reported that the quake had a focal depth of ten kilometers.

The inter-ministerial team of natural disasters (Minister of Civil Protection Christos Stylianidis, Christos Triantopoulos, Deputy Minister of Infrastructure, George Karagiannis) has organized troops and services, as well as monitoring the earthquake in Crete.

A C-130 military aircraft with a team of the Special Disaster Unit (EMAK) of the Greek Fire Service will be assisting and monitoring areas affected by the earthquake, as well as necessary search and rescue operations. In addition, a team of competent ministers will conduct autopsy within the day to the damages done in the villages.