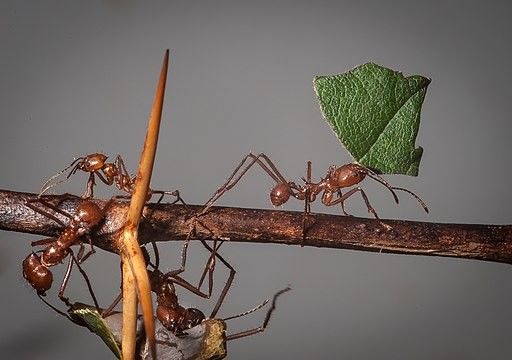 'Small but terrible' is what perfectly describes leafcutter ants. Their metal-laced teeth can pierce through tough materials like wood or even skin. What makes these arthropods acquire their biting edge was explained by a new study published in the journal Scientific Reports.

Leafcutter ants (Atta cephalotes) typically consists of foraging columns composed of hundreds or thousands of ants carrying small pieces of leaves. They clip out pieces of leaves with their jaws and transport the fragments to an underground nest.

Scientists found through a microscope a web of zinc atoms woven into the biological structure of the ants' jaws which explains them having sharp teeth with "the durability of a set of stainless steel knives," authors said.

The zinc laced in their teeth allows the edge to form a fine point, keeping them sharp for a long time.

"The tiny animals who had this material, their muscles are microscopic compared to ours," said lead author Robert Schofield, also a biophysicist at the University of Oregon.

Compared to a human jaw, arthropods' such as ants biting trick is a 'remarkable feat'. Schofield noted that "metal-mouthed arthropods leverage their sharp chompers to apply precisely the right amount of cutting force to slice through leaves or hide."

Although the team of researchers have known that ant teeth have a lot of zinc, how metal atoms were arranged and how it helps the ants' bite remain unknown. Using an ion beam microscope, the team examined the material makeup of leafcutter ant teeth before and after biting to calculate its hardness, sharpness and durability.

"Ants don't rely much on mandibles to process food," said Cristian Klunk, an ecologist at the Federal University of Parana, Brazil, who was not involved with the study. "But they do use them for pretty much every other task, from defense to home renovation, and so they need to keep them in tip-top shape."

How an ant's jaw differs from ours

The human teeth are covered in a layer of enamel, a calcium-rich material that is the hardest substance in the human body. Observing an enamel under an electron microscope would show you calcium and phosphate molecules forming a chunky crystal matrix around carbon, hydrogen, and oxygen atoms. These cyrstals are what make teeth strong, but prevent them from being razor-sharp at the same time.

This material is not far from what ants have. Ant's mandible are coated in a smooth blend of proteins crisscrossed with zinc which is counterpart to human tooth enamel for strength, also known as 'heavy element biomaterial' (HEB). However, the zinc does not form blocky crystals; instead it stays evenly distributed throughout the protein mixture, allowing teeth to have sharp edges.

There metallic reinforcement are also not limited to ant teeth. Other invertebrates also weave zinc or a similar metal, manganese, into their jaws. In fact, these addition of zinc or manganese to their exoskeleton reduces the amount of force needed to pierce or cut through tough material by 60%.