In 2018, researchers first estimated the enormous stone camel carvings at Al Jawf, Saudi Arabia to be 2,000 years old. It was not until recently that they found out they were 6,000 years behind.

If estimates are right, these 8,000-year-old behemoths would be the world's oldest surviving three-dimensional animal reliefs of this size.

"They are absolutely stunning and, bearing in mind we see them now in a heavily eroded state with many panels fallen, the original site must've been absolutely mind-blowing," said Maria Guagnin, the lead author of the study and an archeologist with the Max Planck Institute for the Science of Human History.

A Historical and Symbolic Place 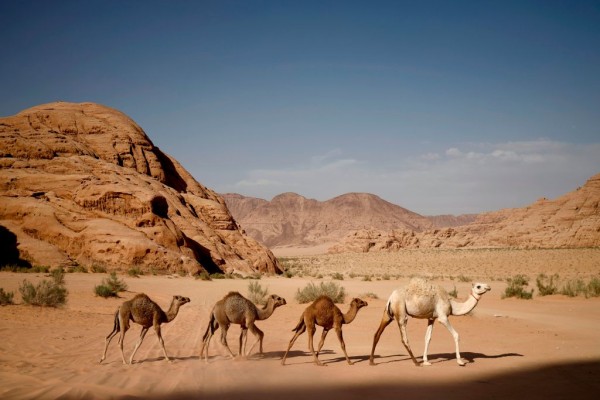 (Photo : Photo credit: THOMAS COEX/AFP via Getty Images)
A picture taken on May 25, 2019, shows camels walking in the Southern Jordanian desert of Wadi Rum. - Wadi Rum and its stunning landscape is listed as a UNESCO world heritage protected site, with the organisation noting its ancient rock carvings and archaeological remains. The Wadi is one of Jordan's important tourist destinations, and attracts an increasing number of foreign tourists, particularly trekkers and climbers, but also for camel and horse safari or simply day-trippers from Aqaba.

Using chemical analysis, archeologists were able to determine that the reliefs were much, much older than previously discovered. The 21 sculptures which have been identified so far was found to have predated the Pyramids of Giza (which are about 4,500 years old) and Stonehenge (which is about 5,000 years old).

"We can now link the Camel Site to a period in prehistory when the pastoral populations of northern Arabia created rock art and built large stone structures called mustatil," the study published in the Journal of Archaeological Science: Reports explained.

"The Camel Site is therefore part of a wider pattern of activity where groups frequently came together to establish and mark symbolic places."

Historically, the camel carvings in a vast desert was speculated to be created by ancient people thousands of years ago, which at the time had grasslands filled with lakes and trees. They were said to have spent ten to fifteen days on each carving, using stone tools that needed constant sharpening and replacement. These ancient artists would have needed some sort of scaffolding to reach the highest parts of the rock.

Also read: Eight Hatchlings from One of the World's Rarest Crocodile Species Found in Cambodia

What purpose did the camel carvings serve

"Communities of hunters and herders tend to be very dispersed and mobile, and it's important for them to meet at regular times during the year, to exchange information, spouses, and so on," explained Guagnin.

"So whatever the symbolism of the sculptures, this may have been a place to bring the whole community together."

The sculptures themselves reflects ancient people's culture. The sculptures of camels with round bellies and bulging necklines seem to depict mating season. Thus, it seems likely that they originally represented fertility, or perhaps marked a time of year when nomadic people gathered.

What archaeologists are concerned in the moment are the carving's future as time takes its toll on such ancient pieces.

"Time is running out on the preservation of the Camel Site and on the potential identification of other relief sites as damage will increase and more reliefs will be lost to erosion with each passing year," Guagnin said.

Hopefully, preservation efforts will be timely for the reliefs, as such discoveries don't come around often.