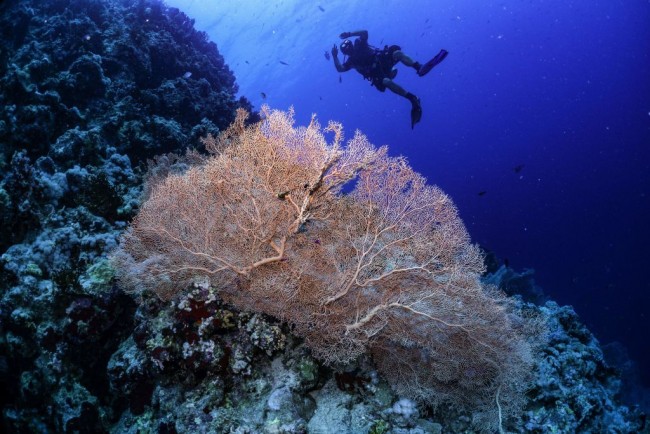 This picture taken on September 5, 2018 shows a diver swimming over a Gorgonian sea fan on a a coral reef in the Egyptian Red Sea marine reserve of Ras Mohamed, off the southern tip of the Sinai peninsula.
(Photo : Photo by EMILY IRVING-SWIFT/AFP via Getty Images)

Reefs have been in danger for a long time, but new research published today in the journal One Earth analyzes coral losses throughout the world. Since the 1950s, half of coral reefs have been destroyed, according to the study.

Coral reefs and the diversity of fish species they sustain are in significant drop from Australia's 1,430-mile (2,300-kilometer) Great Barrier Reef to the Indian Ocean's Saya de Malha Bank, a trend that is expected to continue as the globe warms in the twenty-first century.

Climate change, overfishing, and pollution, according to scientists, are causing havoc on these delicate ecosystems, jeopardizing populations, and livelihoods.

The Effects of Climate Change to Coral Reefs

The impact of these changes on 'ecosystem services,' or coral reefs' ability to deliver major benefits to people, was studied for the first time by researchers led by the University of British Columbia. From the 1950s to the present, changes in coral cover have been observed.

The researchers discovered that the loss of coral reef covering has resulted in more than 60 percent drop in fish biodiversity and biomass, as well as an equivalent reduction in ecosystem services.

They have cautioned that the ongoing degradation of global reef systems poses a threat to the well-being and progress of coastal populations that rely on reefs.

Coral reefs are an important source of food for billions of people across the world, particularly in island native groups where fish is the major source of animal protein, and experts are concerned about future food security.

Even though the study only looked at data from 3,582 reefs from 1957 to 2007, scientists were convinced that the worldwide trend had persisted, with bleaching, illness, and disturbances driving the reductions. The deterioration of coral reef ecosystems had previously been documented at a national level, Tyler Eddy, a research Scientist at Memorial University of Newfoundland who conducted the study, said he was shocked by the scale of the damage.

Researchers noted that the variety of species on the reef was changing in certain regions when analyzing the surveys, with temperature-sensitive fish dropping and more robust species becoming prevalent, according to Eddy.

Despite regional variances, worldwide coral reef health has continued to decrease, according to John Bruno, a marine biologist at the University of North Carolina and co-author of the research.

They also looked at variations in fishing across the food chain, as well as Indigenous peoples' seafood intake along the coast.

The team was able to analyze both global and country-level changes in coral-related ecosystem services using data from a variety of sources, including coral reef surveys, biodiversity assessments, and fisheries statistics.

There are three types of coral reef systems the bordering reef is the most frequent form of reef. This sort of reef grows immediately out to sea from the beach. They create boundaries along the seashore and on the islands that surround them.

An atoll is produced when a bordering reef continues to develop upward from a volcanic island that has sunk completely below sea level. Atolls are typically round or oval in form, with a central open lagoon.

Barrier reefs are like fringing reefs in that they both border a coastline, but instead of extending directly out from the beach, they are separated from the land by a large body of water. Between the reef and the coast, a lagoon of open, frequently deep-water forms.