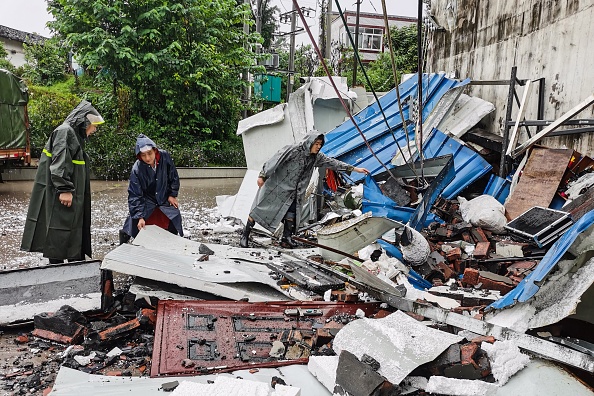 Rescue team began work after the magnitude-6.0 earthquake. The official Xinhua News Agency said the quake struck at 4:33 a.m. at a depth of 6 miles (10 kilometers) in a county in the city of Luzhou called Luxian.

Fallen walls and houses could be noticed on the way to the epicenter. There has also been a suspension of electricity in a greater part of Jiaming town. People inhabiting the region could be seen tidying their surroundings, Xinhua reported.

Rescue workers were going from one house to the other in torrential rain in search of people in destroyed houses in Fuji town so they can be evacuated to temporary shelters, Xinhua said. Workers shared mooncakes, a traditional food for the Mid-Autumn Festival taking place next week, and other edible at one shelter.

A Fuji resident named Lai Jianrong told Xinhua that she noticed a less intense tremor around 4 a.m. and she rushed out with a barefoot putting on her nightgown when the tremors became very serious.

"Some bricks fell off the wall and I didn't dare to go in again," the agency quoted what she said.

CCTV said over 3,200 people have been evacuated to 79 shelters.

Earthquakes often occur in Western China. A magnitude-7.9 quake that took place in May 2008 took the lives of almost 90,000 people in Sichuan, many of the victims died from collapsed schools and other buildings that were poorly constructed.

The epicentre of the magnitude-7.9 quake which the Chinese measured as magnitude 8.0 was situated close to the city of Dujiangyan, about 80 km (50 miles) west-northwest of the provincial capital, Chengdu, at a depth of 19 km (11.8 miles) beneath the surface.

The Wenchuan earthquake made some four-fifths of the building in the impacted region flat. The quake destroyed the entire villages and towns in the mountains, and most schools collapsed.

Close to 90,000 people were reported dead or missing and in the final formal Chinese government assessment, some were presumed dead. The officially reported that the total number dead included over 5,300 children with majority being students attending classes.