Temperature, soil moisture, the existence of trees, bushes, and other potential fuel are all elements that influence wildfire risk.

All these elements are linked to climate instability and change, either directly or indirectly. Climate change has increased the drying of organic matter in forests (the material that burns and spreads wildfires), doubling the occurrence of major fires in the western United States between 1984 and 2015.

Climate change, according to research, results in warmer, drier circumstances. Drought and a longer fire season are contributing to the rise in wildfire risk. 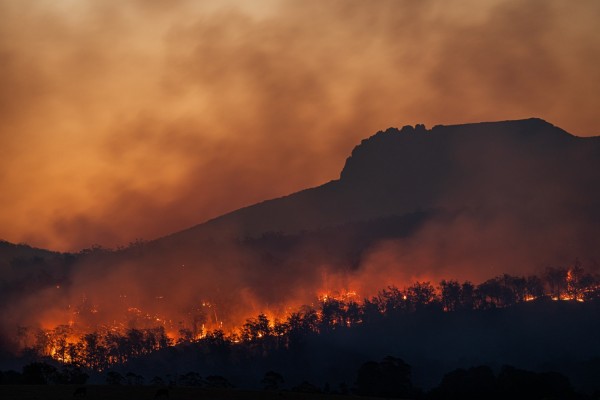 Warmer temperatures and drier conditions can help flames grow and make them harder to put out once they start-people are responsible for more than 80% of wildfires in the United States. Warmer, drier temperatures also aid the spread of the mountain pine beetle and other insects that weaken or kill trees, accumulating forest fuels.

Wildfire risk is also influenced by land use and forest management. Climate change is anticipated to worsen these issues, increasing the area affected by wildfires in the United States.

However, wildfire smoke pollution can travel up to 1000 kilometers, and the risk of wildfires is expected to rise as climate change increases.

Effects of Air Pollution to Health

When wood and other organic materials burn, smoke is formed from a complicated mixture of gases and fine particles. The fine particles in smoke are the most dangerous to one's health. These small particles have the ability to reach your lungs deeply.

They can cause everything from burning eyes and a runny nose to exacerbating chronic heart and lung ailments. Particle pollution has even been linked to an increased risk of mortality.

The first comprehensive study of the global impact of wildfire-related pollution on deaths relates short-term exposure to fine particulate matter in the air and all-cause, respiratory, and cardiovascular mortality across cities and regions around the world.

The research from an international team, led by Professor Yuming Guo and Dr. Shanshan Li, from the Monash University's School of Public Health and Preventive Medicine in Melbourne, Australia, found that over 33500 deaths occurred each year directly attributable to wildfire pollution, across the 749 cities in the study.

There has been widespread wildfire devastation in recent years-from the 45 million acres scorched during Australia's 2019-2020 fire season, to the more than 1.2 million hectares burned across California since the beginning of 2019, to the record amount of carbon dioxide released from more than 190 wildfires across Siberia, which now account for more than all of the world's wildfires combined.

According to Monash University "Wildfire particulate matter is more toxic than that from urban fires particles because of its chemical composition, smaller particle size and associated high temperatures."

In Conclusion, the authors have discussed that "policymakers and public health professionals should raise awareness of wildfire pollution to guide prompt public responses and take actions to reduce exposure. Effective wildland management policies and practices should be implemented to manage vegetation and mitigate climate change as far as possible."