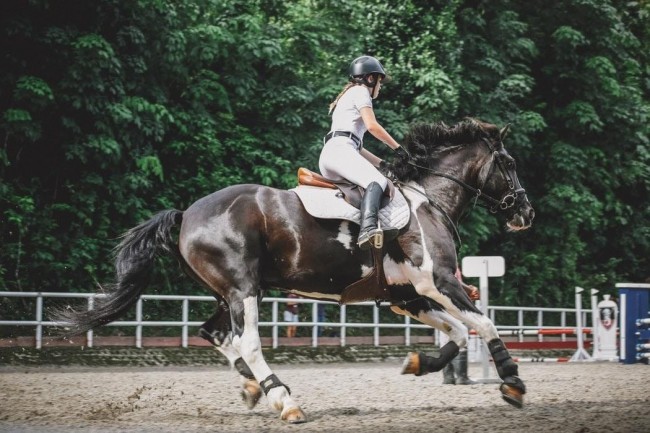 The Olympics showcase the talents of the best athletes in the world. Equestrian, a sport played by men and animals, may not be the most high-profile sport in the Olympics, but it is no doubt the best, according to some.

It is the only Olympic sport in which animals compete, and it is also one of the few Olympic sports in which men and women compete against one another. The horses competing at this contest are magnificent examples of equine athletes.

Today, we'll share some fascinating truths about the equestrian sport that will astound you. Let's get started!

Equestrianism, or horseback riding, was first introduced in the 1900 Summer Olympics in Paris, France. But for the next two Olympic Games (1904 & 1908), it was not included. After this break, it made another appearance in 1912 and was permanently included from 1920.

The 1924 Olympics were the first to be organized by the FEI- the Federation Equestre Internationale, the world's regulatory body for equestrian sports. You can learn about renowned Olympic Gold medal equestrians on Horsevills.

The competition entails six equestrian events in different venues with three stages: dressage, jumping, and eventing. Gold, silver, and bronze medals are awarded in each event for both team and individual achievements.

Only commissioned military officers were permitted to compete in horse sports until 1952. After 1952, dressage was opened up to civilians and women. Women were later permitted to participate in jumping in 1956 and eventing in 1964.

Dressage is training a horse to carry its rider with comfort and grace. It allows competitors to display how obedient and well-trained their horses are. Dressage competitions involve riding at varying speeds and different paces in the event.

Dressage is scored based on artistic marks, the accuracy of movements, expressions, choreography, and harmony.

This event tests the ability of a horse to jump over different obstacles in a riding ring. The spectacular, and simplicity of its rules, as well as playful aspects, make this sport highly attractive.

The horses need to make ten to sixteen jumps over obstacles in an arena that can be as high as two meters wide or tall. Obstacles could include water jumps, parallel rails, and triple bars. They are colorful and have various tricky turns to test both rider and horse's physical and mental agility. Faults, or penalties, are incurred based on course time, refusals, and knocking down rails.

Scoring is based on the number of falls, touches, jumps, time penalties, and refusals to jump. The rider with the least penalties wins. In case of a tie, a jump-off can be used.

Eventing tests the skill, endurance, versatility, and courage of the rider and horse. It occurs over three days and features dressage, cross country, and jumping. Each rider is ranked based on the performance in all these three tests, and team medals are awarded the lowest number of penalty points.

Dressage and jumping are covered in the other events, while the cross- country is unique to eventing. The cross-country test takes place in a course filled with up to forty natural and man-made obstacles. It is scored based on rider falls, adhering to the time set, and refusals.

Rules to Compete in the Equestrian Olympics

Fun Facts about the Equestrian Sport

1. Equestrianism in the Olympics dates back to 682 BC when the Hippodrome hosted a four-horse chariot race during Greece's 25th Olympiad.

2. Britain is the only nation that has taken home a gold medal in every Olympics in Equestrian events.

3. Germany set a record for the most golds in Olympic horse sport's history, with 25. With 17, Sweden is in second place, and France is third with 14.

4. The United States holds the record for the maximum silver medal, 21. In addition, the Netherlands, France, and Germany are tied for top place with 13 silver medals each.

5. The United States has also won the maximum Bronze medals. Germany is second, and Sweden is third.

6. No medal was awarded to the dressage team until the 1928 games.

7. In the 1900 Paris Olympics, there were more athletes than spectators on the field during equestrian events.

8. Vaulting, polo, high jump, and long jump are no longer part of the Olympic equestrian events.

10. In the 1936 Berlin Olympics, Germany won all of the Equestrian competitions.

12. Two horses died in the 1968 Mexico Olympics. Since then, there haven't been any horse casualties in the Olympics, and strict rules were laid for the security and health of the horses.

13. Drug rules for horses were brought in during the 1972 Munich Olympics, though there were no doping tests taken at that games.

14. No other Olympic sport has greater diversity between ages than equestrian sports. From 18 to 72, men and women of all ages have competed in this section.

15. The oldest ever competitor, Arthur von Pongracz (Austria), won a dressage competition at the 1936 Olympics when he was 72 years old.

16. The oldest woman to participate in the equestrian Olympics is Lorna Johnstone (Britain), who took part in the 1972 Olympics when she was 70.

17. The first Olympic rider for China was Alex Hua Tian, who competed at the Beijing Olympics.

19. The 1956 Olympics were organized in Melbourne, Australia, but because of the strong quarantine rules in Australia, equestrian events were held in Stockholm in Sweden.

21. 2,067 riders have participated about 4,000 times in Olympic Equestrian sports since 1912. Most of these riders are one-time competitors.

22. The horses are treated like kings and queens. Most of them have a complete team just to take care of them. Some even have personal psychologists.

23. The horse is at an equal level to the rider, and both are considered medal winners.

24. Lisa Hartel of Denmark won a silver medal in riding at the 1952 Olympics despite being paralyzed from the waist down by polio and needing assistance on and off the horse.

25. At the 1960 Olympics in Rome, Australia's Bill Roycroft broke his neck in the cross country phase of the team eventing, but he got discharged from hospital the next day to help Australia claim the gold medal and to complete his show-jumping round.

Equestrianism is not only a sport, but art to express tribute to the history of the relationship and communication between rider and horse. Equestrian Olympic events showcase the best of the best among these tributers.