On August 26, a C3 flare erupted from sunspot area 2859 on the Sun, sending a solar blast towards the Earth, according to the National Weather Service's Space Weather Prediction Center (SWPC).

The SPWC determined that a partial halo CME occurred by analyzing available images from the SOHO/LASCO sensor. According to a statement published by the SWPC, study and modeling are currently ongoing to see if this CME has a geoeffective component. 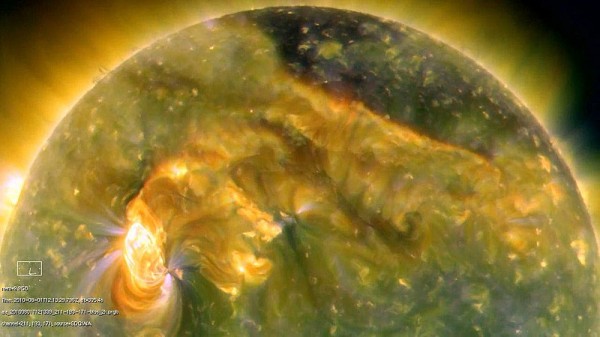 This solar outburst appears to have triggered a "solar tsunami." The hallmark of a large-scale solar corona shock wave created by solar flares is a solar tsunami, also known as a Moreton Wave or a Moreton-Ramsey Wave. Although the presence and mechanics of such a tsunami were first detected in the late 1950s, NASA's technology in 2009 verified the existence and mechanics of such a tsunami.

Unlike a typical tsunami, a solar tsunami is a wave of hot plasma and magnetism that reaches a height of 62,000 miles and travels across the solar system at velocities of about 560,000 mph.

The twin STEREO spacecraft caught the sudden eruption of sunspot 11012 in February of that year; the outburst blasted a billion-ton cloud of gas into orbit and sent a tsunami racing over the Sun's surface. The wave was captured by STEREO from two places separated by 90 degrees, providing researchers a unique perspective on the occurrence.

"It was a wave," says George Mason University's Spiros Patsourakos, lead author of an article published in Astrophysical Journal Letters that details the discovery. "Not a wave of water, but a massive surge of hot plasma and magnetism," says the narrator.

"Fast-mode magnetohydrodynamical wave," or "MHD wave," for short, is the technical term. The one seen by STEREO rose to a height of nearly 60,000 miles, flew outward at 560,000 mph, and had the energy of 2.4 million megatons of TNT.

Now, it appears that a CME from area 2859 triggered a comparable solar tsunami.

Geomagnetic storms are rated on a 1-5 scale, with 1 being the weakest and 5 having the most potential for damage. Even a G1 geomagnetic storm could create weak power grid fluctuations and minor impacts on satellite operations. Aurora, also known as the "Northern Lights," could be visible from northern Michigan and Maine to points north at high latitudes. Impacts and aurora change as the geomagnetic storm scale increase.

Solar characteristics are analyzed by NOAA forecasters and must be considered throughout each forecast. If Earth is affected by a coronal hole and a coronal mass ejection is expected to hit the planet, the combined impacts might cause a larger impact and more violent geomagnetic storming.

Forecasters can detect when the increased solar wind from a coronal hole will arrive at Earth by analyzing data from the DSCOVR and ACE satellites.