In the middle of August, a team of marine biologists based in Massachusetts began a journey on the ocean of Stellwagen Bank National Marine Sanctuary, just east of Boston. 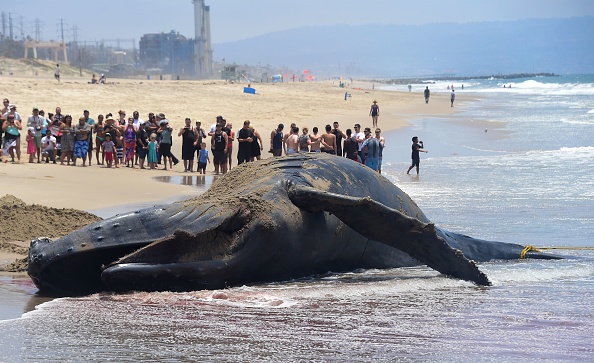 Their mission was to identify some basking sharks - the world's second-biggest shark species, and a beast of prey still regarded as a highly strange species to scientists. But not too long after the team began their journey, another marine animal got their attention.

The animal was a young humpback whale, floating lifelessly on the surface of the ocean. Then, the sharks showed up.

A research ecologist at Stellwagen Bank, named David Wiley told Live Science that "eight or more great white sharks had found the carcass," and were ripping up its blubber.

Wiley said it was an "unimaginable" display, crowned with so many starved seabirds descending to take away pieces of whale flesh out of the bloody water. The havoc can be seen in the new footage by the National Oceanic and Atmospheric Administration (NOAA) and Stellwagen Bank.

Wiley said: "It was nature in action. Everything dies for something else to consume. Nothing goes to waste."

Humpback whales which can grow to the extent of reaching the size of a school bus, wander all around the world and are often found at feeding grounds of high-latitude such as Stellwagen Bank in summertime.

Sadly, that can place the animal in the way of big boats and fishing nets. And these are the two main threats that humpbacks face in the wild, Wiley said. One of those threats is possibly what led to the death here.

One of the biologists at the location of the event in Stellwagen glanced at the fingerprint-like pattern beneath the lifeless fluke (or tail fin) of the humpback and recognized it as the 1-year-old calf belonging to a known mother whale whose name is Venom.

Because of the dead whale's young age, there is a possibility that the calf became a victim to some kind of human interaction, Wiley said. 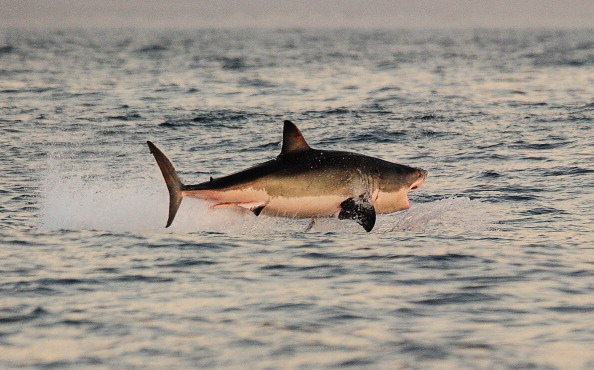 However, before the researchers could arrive, the sharks had chewed up the body so badly that it was not possible to discover any clear proof of what had caused its death.

While the sight of the lifeless calf was a sad one, the researcher was also aware that the resulting feeding frenzy was a very unusual sight, and an uncommon opportunity to spot great whites at the top of the water.

The researchers used the opportunity to tag five of the sharks that were feeding on the calf with special acoustic sensors. This sensor will help NOAA scientists track the behavior and movement of the mysterious predators as they move all over Stellwagen, and south at some point to their wintering grounds.

Related Article: Humpback Whales May Have Recovered from Close-Extinction, But Are They Safe From Danger?