The death toll from Saturday's devastating floods in Middle Tennessee has increased to over a dozen people. The sheriff in Humphreys County reported five more deaths on Sunday morning, in addition to the ten verified Saturday night.

According to the sheriff, over 30 individuals are still missing. About 45 miles west of Nashville is where you'll find this region. Flooding caused by heavy rain-stranded families in their houses shut down roadways and necessitated several water rescues on Saturday morning.

The full extent of the damages showed up after the waters receded.

Our swiftwater crews spent the day assisting in Humphreys County. The damage observed is devastating. Please keep Humphreys, Dickson, and Hickman Counties in your thoughts and prayers as they work to rebuild and recover. #middletnwx #tnwx #flooding pic.twitter.com/wiuBrMecxu

To escape the flooding and await rescue, many resorted to their rooftops and attics. As a result, homes were washed away, and entire villages were obliterated. 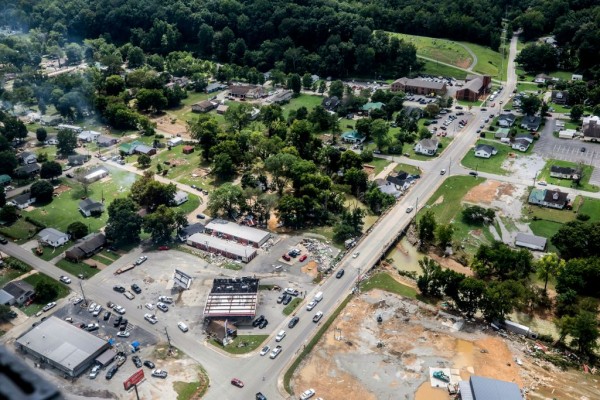 Before daybreak, Saturday, the fire department in Dickson, approximately 35 miles west of Nashville, began responding to requests for assistance. Several residents were also stranded in their houses. Residents told of being stranded for many hours.

Cindy Dunn, who lives in the Humphreys County hamlet of Waverly, told The Tennessean after the responding team rescued her and her husband from their attic, "Hell. That's what we had to go through."

The couple had taken refuge there to avoid the rising floods. A crew came to their aid by raising a bulldozer bucket to their attic window. The swift floods entirely obliterated them.

"One minute my husband was watching the news, and the next minute we didn't have a garage," Dunn added.

"People are stranded in their homes with no method of escaping. It's up to their necks in water. It's a disaster, the worst type of catastrophe imaginable The flooding in Humphreys County, where Waverly is located, was described by Krissy Hurley, a meteorologist with the National Weather Service in Nashville, to The Tennessean.

In response to the flooding, the Tennessee National Guard sent troops and airmen to the region. In addition, three state-based helicopter aquatic rescue teams and swift water rescue teams from Nashville were dispatched to help.

911 service was lost in Humphreys County. Several persons were reported missing in Hickman County, which is close. In both counties, the weather event disrupted cell service, and flooding forced the closure of a significant part of Interstate 40.

With 15 to 17 inches of rain reported in 24 hours in regions surrounding Dickson, Houston, Humphreys, and Hickman counties, the NWS issued a flash flood emergency and stated that it was "an extraordinarily active flash-flood scenario."

According to the NWS, some of those quantities are equal to 25% of the average rainfall for the whole year.