An alligator dragged a Utah reptile center staff and handler into its enclosure until a visitor stepped inside and helped release her from its jaws.

In suburban Salt Lake City, an unnamed handler at Scales & Tails Utah is shown on video talking to several parents and children about the alligator that bit her hand and dragged her into the lake on Saturday.

Entering to Feed the Gators

According to Shane Richins, the company's owner, the handler was entering the enclosure to feed the alligator as usual, but the reptile "got a bit extra feisty" this time.

When staff is dealing with the alligators, he added, the facility has a strict policy of having a second handler nearby. However, he claims that this hasn't been enforced in recent years if the worker isn't planned on entering the enclosure.

"We still rigorously enforce it anytime someone goes in with the gator," Richins said, adding that "going ahead, we will be back to strictly enforcing it with any encounters with the gator for that same reason."

The alligator began whirling around and clamping its jaws on the handler as she fought to get free after being dragged into its enclosure.

"We've got problems in here!" shouted one of the attendees, subsequently identified as Donnie Wiseman, before rushing into the water and crawling on top of the reptile.

According to the footage, another witness escorted the youngsters away while they wept.

Wiseman trapped the alligator, and the handler calmly instructed him and another guy, Todd Christopher, to assist her in escaping the pool. Wiseman kept a tight grip on the snake until the woman was free.

The handler had surgery and is on antibiotics, according to Richins. She is "doing well and is in recovery," according to the West Valley City company. Scales & Tails Utah, according to its website, is a family-run business that offers instructional presentations on reptiles, birds, spiders, and scorpions.

The guests who went to the handler's help were praised.

"These gentlemen could have waited in the safety zone like most of us would have," the firm stated in a statement. "But instead, they rushed into the situation on their initiative and helped catch the alligator." "Their assistance, along with our staff member's training, most likely saved her life and limbs." 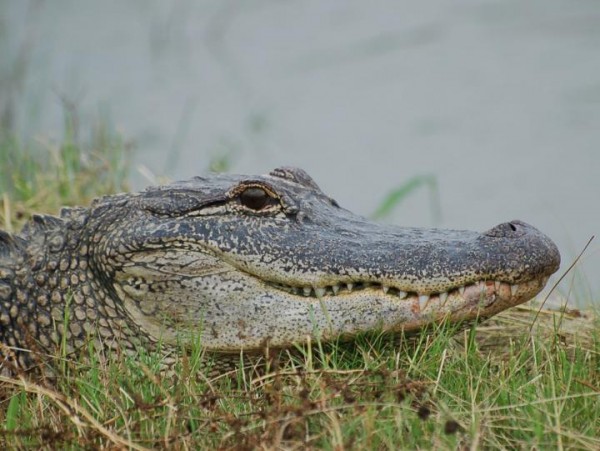 While catastrophes can occur, such as when an alligator takes a youngster from his father's grip, such heinous acts are rare. Even yet, they make headlines, making would-be explorers tremble in terror at the sight of one of these cunning reptiles. But, with a bit of knowledge and at least a smidgeon of respect, you can avoid a fight with a gator and, if worst comes to worst, escape with your life.

What to do During Attacks?

If you get into a battle with an alligator in the water, though, you lose the upper hand since the animal is a much better swimmer than you. After latching on to a limb, it may attempt to roll. If this occurs, do not attempt to stop it. Instead, "roll" with it, but fight as if your life depended on it-because it very well may.

Punch it in the sensitive snout, poke it in the eyes, and put an arm down its neck. Mazzotti believes the goal is to persuade the alligator that you're not worth the bother.

He also points out that alligators frequently bite and then release (more than 36% of the time, according to The Journal of Wildlife Management), or bite and then loosen their grasp to reset their grip. If they do, take advantage of the situation.

But don't try to wiggle free or wrench its jaws open if you weren't quick enough-you won't be able to. Instead, fight as hard as you can until the animal surrenders.

Also Read: Despite Pressure, Wisconsin Allows Hunters to Kill Up to 300 Wolves During the Fall Hunt