In an old lava tube in Saudi Arabia, a massive hoard of mixed animal bones was discovered, along with human remains.

Umm Jirsan, a hollow cave beneath the volcanic fields of Harrat Khaybar in the northwest of the nation, is a vast lava conduit system. It is the longest known recorded lava tube in Arabia, stretching over 1.5 kilometers (nearly a mile). Wild animals have been active inside those vast shadows.

Researchers identify the finding of hundreds of thousands of bones from at least 14 distinct species of animals, including cattle, horses, camels, rodents, and more. In a new study, some of the bones are even humans.

On Twitter, zoo archaeologist Mathew Stewart of the Max Planck Institute for Chemical Ecology in Germany wrote, "This 1.5 km long lava tube is chock-a-block with hundreds of thousands of beautifully preserved animals remains."

Hyenas Collect Human and Animal Bones in The Arabian Cave 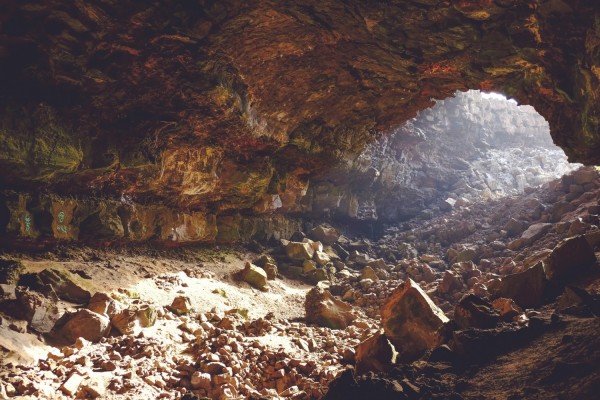 According to the researchers, this huge hoard of bones was most likely scavenged together by striped hyenas (Hyaena hyaena), whose skeletal remains were also discovered in the cave, along with their preserved droppings (called coprolites).

"The beasts are avid collectors of bones, and they bring it to dens to be eaten, given to young, or stored. According to Matthew Stewart.

It is conceivable that other creatures, such as foxes or wolves, gathered the massive bone collection. However, according to the study, most of the evidence goes to hyenas' wolves seldom spread bones far from death sites, and foxes cannot transport or readily digest such huge prey.

Furthermore, several of the marks on the bones are consistent with hyena chewing and digestion.

"Taken together, the large size of the assemblage, the abundance and intensive processing of ungulate limb bones, abundant hyena coprolites, and presence of juvenile hyena and human cranial remains suggest that Umm Jirsan served primarily as a striped hyena den, and, on occasion, as a maternal den," the researchers write in their paper.

The Excellent Bone Preservation in The Arabian Cave

Researchers have previously been discovered in the Umm Jirsan lava tube, there is still much that we do not know about the taxonomy of species in the cave or what those remains can tell us about paleoecology in the area.

"The material accumulated at Umm Jirsan over the last 7,000 years, attesting to the excellent conditions for bone preservation within the lava tube," says Matthew Stewart.

This old hyena den, on the other hand, is not just a relic from the past. Researchers heard sounds of "growling" in the cave during a previous investigation of the lava tube in 2007, indicating that Umm Jirsan is still an active place for animals to gather bones.

While there is still a lot, we do not know about Umm Jirsan, the researchers believe that this gruesome tomb will act as a time capsule that will provide information on ancient Arabia's paleoecology and prehistory.