Whale watchers off the coast of Japan couldn't believe their eyes when they saw two rare white orcas swimming together as part of a pod.

The orcas were sighted on July 24 on a whale-watching cruise in the Kunashirskiy Strait, a 20-mile stretch of water between Hokkaido and Kunashir's northern islands.

One of the two was older and had somewhat darker skin, while the other was younger and had plainly apparent scratch scars along its back, according to Mai, a Gojiraiwa-Kanko tour business employee. 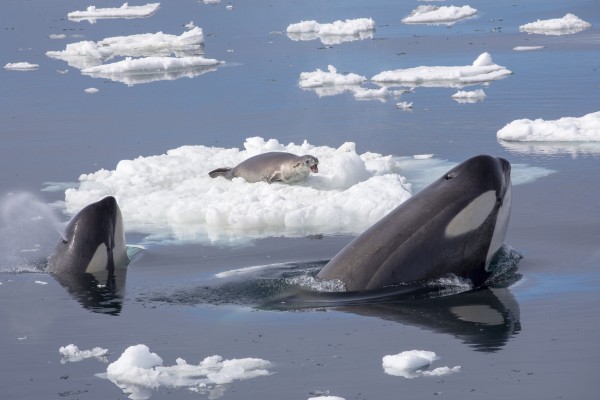 'It was the best day of my life.' Two white orcas have been spotted off the coast of Japan for the first time,' she added.

The pair aren't 'genuine' albinos, which are defined by a genetic condition that prevents the affected animal from producing any melanin, the pigment that gives skin, hair, feathers, and eyes their color.

True albinos will have totally white skin and crimson eyes caused by red blood vessels concealed below the iris leaking through.

Instead, these two whales are considered to be suffering from leucism, a disease in which animals generate some melanin but have markedly paler skin or white skin in areas.

That explains why the white patches that typically encircle an orca's chin and eyes are still evident on the two creatures seen near Japan, as well as why the eyes remain black.

It might also explain the scarring on the younger animal's side, mainly because the scar tissue appears to have healed in a deeper tone than the surrounding white skin.

According to experts, white orcas and whales used to be so rare that they were considered a myth, but they are growing more prevalent, with at least five specimens surviving today.

It's unclear why they're becoming more prevalent, but experts believe it's due to declining whale numbers and that it's an indication the species is in peril.

Because the animals left have fewer possible partners to select from, genetic diversity decreases as a species' population shrinks.

It might highlight some previously considered to be genetically uncommon, depending on the genes inherited by those remaining people.

This includes uncommon genetic abnormalities that make it difficult for an animal to thrive in the wild, perhaps hastening the extinction of the species.

While it is unknown what effect leucism has on the lives of orcas that inherit it, it does make them more noticeable, which might hinder their hunting abilities and draw unwelcome attention from rivals.

The characteristic, on the other hand, isn't necessarily bad. Kermode bears, for example, are typically black but, owing to a recessive trait, are increasingly being born white.

Scientists discovered that the feature enables them to catch more fish since salmon are harder to notice.

Also Read: Whales and Dolphins Can Resist Cancer, and the Secret Lies in Their DNA Evolution!