The United States Geological Survey (USGS) had currently tracked US active volcanoes exhibiting eruptions risks, 'with elevated unrest above known background level', and posted Orange code and Watch alert for one volcano and a Yellow code and an Advisory alert for six others across the country.

USGS and their Alaska Volcano Observatory (AVO) have raised highest alert code for Great Sitkin in Alaska, up to Orange and Watch.

Meanwhile, the six includes the world's largest active volcano, Mauna Loa, and Kilauea (both on Hawaii's Big Island), Gareloi, Semisopochnoi, and Cleveland, with the heightened level of alert of Yellow/Advisory.

Monitoring the Hawaii and Alaska Volcanoes 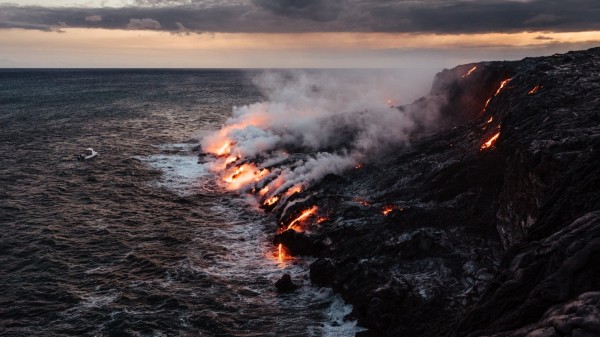 The USGS estimates around 169 active volcanoes in the US, most of them are in Alaska, a home to many volcanoes. Although there are over 130 volcanoes and active volcanic fields within the geologically young last 2 million years, 50 have been active since the mid 1700s, AVO found.

On the Big Island of Hawaii, the famous Kilauea, Mauna Loa, and Hualalai are considered active and has potential risk of erupting, monitored by the Hawaii Volcano Observatory (HVO). While Kilauea, which erupted in December 2020 came to an end just weeks ago, USGS and HVO remains concerned for nearby Mauna Loa volcano, the world's largest active volcano.

As of now, no unusual activity or signs have been reported by other observatories more than the typical background noises.

The Ring of Fire

The 'Ring of Fire' around the Pacific Rim is a region where most of the volcanoes in the world are located, and had recorded many volcanic eruptions and earthquakes, due to plate and lithospheric plates movements under and around the Pacific Ocean. Whenever these plates collide and/or destroyed, it creates a seismic activity the Ring of Fire is known for.

As a part of monitoring active volcanoes in the US, there are designated observatories that are responsible for issuing Aviation Codes and Volcanic Activity Alert Levels. Aviation Codes are green, yellow, orange, or red. Green indicates normal activity with a non-eruptive state, yellow means there are signs of elevated unrest above known background levels exhibited by a volcano, while orange exhibits heightened or escalating unrest as well, but with increased potential of eruption.

Finally, when there is an imminent and significant emission of volcanic ash in the atmosphere, leading to an eruption, the code becomes red. Volcanoes with insufficient level of activity are simply tagged as 'unassigned', and ones with non-eruptive state is considered normal.

In a recent news release of HVO and USGS scientists, the world's largest at Mauna Loa in Hawaii is foreseen to erupt next. Both observatories suggest to revisit personal eruption plans on advance helps during an emergency, similar to preparing for hurricane season.

Also read: Ancient 'Eye of Sauron' Has Been Discovered as an Undersea Volcano in Australia