While venoms from animals such as snakes are naturally poisonous substances; they can also be scientifically useful in medical advancement.

A team of scientists recently found that these powerful substances which can be dangerous when inflicted to humans, can be significantly beneficial. For instance, several types of venoms from bees are developed as treatment for cancer, and platypus venom for diabetes.

In a recent development, another venom-based medical treatment from snakes was found to stop bleeding in seconds. Researcher refer it as the fast-acting, snake-venom 'super glue'.

The Next Venom-Based Treatment for Wounds 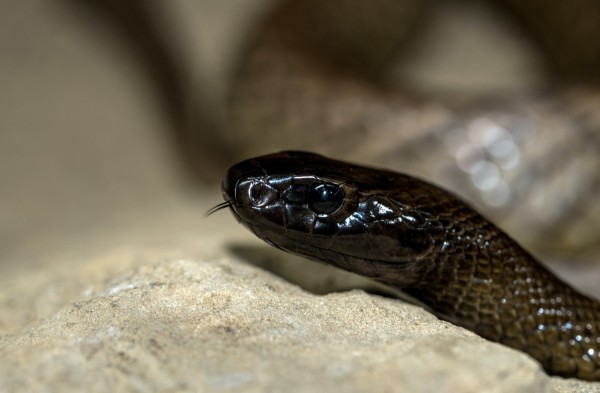 (Photo : Photo by David Clode on Unsplash)
Taipan. You can just see the flickering tongue of this Inland Taipan, as it turns its head towards you. The Inland Taipan is the most venomous land snake in the world.

Synthetic adhesives are surely easier to use than natural adhesives, but the scientists claim the latter to deliver 'excellent biocompatibility'. To test this claim, researchers crafted a bioadhesive gel with the venom of the common lancehead pit viper (Bothrops atrox) in it.

The common lancehead pit viper is the most venomous snake in the tropical lowlands of South America, preying on small mammals, birds, and reptiles, by destroying their vascular systems. Their venom causes excessive clotting of the prey's body which eventually exhausts the prey's capacity to form any clots at all and ends up bleeding excessively instead, a process called consumption coagulopathy.

The molecule responsible for clotting to happen is called the reptilase (or batroxobin). Actually, medical laboratories are already using these enzymes for diagnostic tests to measure fibrinogen levels - a protein produced by our livers to help stop bleeding and form blood clots.

The team used past research as a reference and added the reptilase into a methacrylated gelatin to develop it into a fast-acting tissue adhesive. The reptilase helps sort out blood faster, controlled and set using light, and seal wounds in only 45 seconds.

"During trauma, injury, and emergency bleeding, this 'super glue' can be applied by simply squeezing the tube and shining a visible light, such as a laser pointer, over it for a few seconds. Even a smartphone flashlight will do the job," said Western University bioengineer and one of the study's authors Kibret Mequanint.

Also read: Avoid These 4 Most Terrifying and Deadly Snakes At All Cost!

Using the 'super glue' for major injuries is included in the researchers plan, such as deep skin cut and ruptured aorta, or injuries acquired from accidents. This is yet to undergo more clinical trials, one of the many current developments of venom-based components to save lives. In fact, another research revealed that spider venom has the potential to aid heart attack victims.

"For people who are literally on death's door, this could be life-changing," said Peter Macdonald from the Victor Chang Cardiac Research Institute.

"Systematic exploration of animal venoms allows us to take advantage of the vast natural and over millions of years evolutionary-selected peptide libraries for therapeutic lead discovery," explained Muttenthaler, who worked on spider and scorpion venom to be used for chronic pain relief.

Many of these natural biomolecules still remain unexplored as more people grew interest in transforming these substances into helpful products. However, extinction among these species is feared if habitat destruction continues.