The genetic study of human bones discovered in the Himalayas has generated a slew of mysteries about who these people were and why they were there.

Hundreds of people's skeletons were discovered decades ago near a glacier lake in the Indian Himalayas. However, scientific advancement has produced more questions than solutions.

A tiny body of water is tucked deep up in the Himalayas' cold, snow-covered mountain ranges at a breathtaking height of more than 15,700 feet above sea level where Roopkund Lake is the last resting place for 500 to 800 sets of human remains, according to experts. It is a strange lake where hundreds of people died, and the cold Himalayas preserved their skeletons. Roopkund, or "Skeleton Lake," is less than a football field wide but has a great reputation. 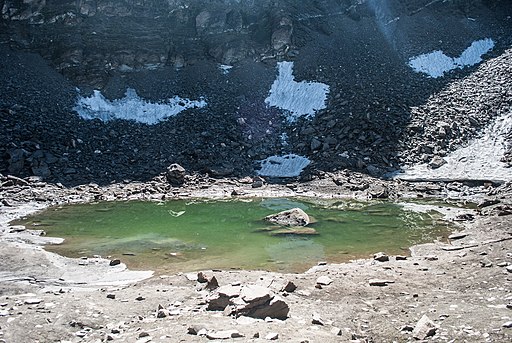 An Indian Forest official discovered the bone remains spread across the lake in 1942. He reported the odd discovery, but it was not made public until the late 1950s. "In the 1950s, one explorer described the site to an Indian radio station as a 'ghastly scene that made us catch our breath,'" according to National Geographic.

Skeleton Lake and other mysteries

It was previously assumed that the skeletons belonged to Japanese troops or Tibetan traders who perished as a result of an epidemic or exposure to the harsh weather. However, forensic research in 2004 found unhealed injuries on numerous skulls, leading experts to infer that in the 9th century, a group of Indian pilgrims, including men and women, aided by local porters, were struck by enormous hail at Roopkund in a single occurrence. Indian scientists were intensely interested in the Roopkund mystery, a place where holy men committed ritual suicide. The villages are on the route of a pilgrimage to honor Nanda Devi, a manifestation of Parvati, a supreme goddess in Hinduism. Carbon dating, still an unreliable innovation, indicated that the bones were between five hundred and eight hundred years old.

Full genetic studies of 38 sets of skeletal bones have now upended that narrative. According to the latest findings, there were 23 people of South Asian origin at Roopkund, but they perished in one or more incidents between the 7th and 10th centuries A.D. Furthermore, the Roopkund skeletons contain the remains of 14 additional victims who perished there a thousand years later Moreover, unlike the earlier South Asian bones, the latter group at Roopkund showed a genetic heritage linked to the Mediterranean-specifically, Greece and Crete. (Another person who died at the same time as the Mediterranean group had east Asian heritage.) None of the people examined were related to one another, and further isotopic analyses indicate that the South Asian and Mediterranean diets differed.

People in the villages below Roopkund had their own interpretation, which was passed down through folk songs and legends like the Jyumra Gali, or Path of Death, is possibly India's longest and most hazardous pilgrimage. It is a pilgrimage to revere Nanda Devi, a manifestation of Parvati, Hinduism's ultimate deity. She cursed her realm, causing drought and calamity and infesting milk and grains with maggots, according to folklore. She then unleashed a hailstorm and a whirlwind, sweeping all the pilgrims on the path into the lake. Their skeletons serve as a warning to anyone who might offend the goddess.