If you haven't heard about it yet, the 'chaotic odyssey' of the wild elephant herd which had been going on for months is still happening and now one of China's longest migrations of its kind.

After these Asian elephants first set off their journey last year, they have been roaming across Yunnan province and traveled over 500 kilometers from its home nature reserve.

Aside from the fact that they are adorable, they also steal villagers' food and trampled over $1 million worth of crops, wherein thousands of residents also had to evacuate to clear their path. 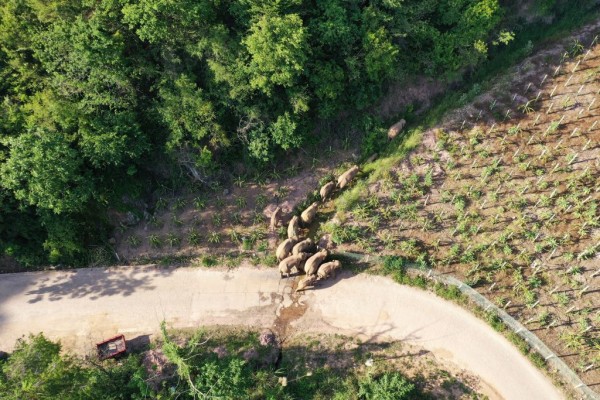 (Photo : Photo by He Xinwen/VCG via Getty Images)
SHIPING, CHINA - MAY 20: Aerial view of a herd of wild Asian elephants migrating northward on May 20, 2021 in Shiping County, Honghe Hani and Yi Autonomous Prefecture, Yunnan Province of China.

Just recently, some locals sighted a lone baby elephant, weighing 180 kilograms. They said it might have been born on the lumbering trek and was abandoned by its herd on a tea plantation on Saturday morning. The locals found wounds and infected injury on the animal's leg.

According to a state media report, the injured baby elephant has been rescued. A state broadcaster CCTV reported that the injury could have been life-threatening if treatment had not been given earlier.

"It's possible that something like rattan spines pricked it and the injuries slowly became infected," told Bao Mingwei, director of the Asian Elephant Breeding and Rescue Center to CCTV. He said that the injured calf was given anti-bacterial and anti-inflammatory drugs and assured its recovery after a longer period of care. Mingwei confirmed that the wound did look 'pretty bad'.

In the footage of the animal rescue, you can see that around a dozen rescuers and police had helped tying the animal's limbs and loading it into a van to drive to a rescue center which was about 100 km far.

Until now, scientists are still puzzled why these Asian elephants decided to leave their home at the Xishuangbanna National Nature Reserve, on the border with Laos, aside from the obvious fact that there might have been a habitat destruction, loss, or conservation challenges due to rise on wild elephant numbers, competition for land resources or disease.

The rising population of China's wild elephant have doubled to over 300 in the past three decades, which does not complement its habitat's resources which have shrunk by nearly two-thirds over the same period. Most likely, these elephants migrate for that main reason.

A month ago, a 10-year-old lone elephant which had broken away from its herd, marching through southern China, was spotted by a local last week. Officials tranquilized the animal and brought it to Xishuangbanna National Nature Reserve, the wildlife department in Yunnan province said. The animal weighs over 1.8 tonnes.

While it looks like these elephants are taking different journeys, other small ones are trying to keep up with the herd's pace. Fortunately, some of the 'dawdling dumbo' were patient enough to wait for the youngsters.

The herd is now lingering in south of Kunming, the provincial capital of Yunnan province.