While it is known that the ocean absorbs more than 90% of the planet's heat, it would be the end for some seabird species of the Arctic if waters continue to warm as much as twice the globe's rate.

Unfortunately, Arctic seabirds are less tolerant to heat and more vulnerable to climate change, a new study found. McGill University researchers revealed that cold-adapted Arctic species such as the thick-billed murre are 'especially vulnerable to heat stress' due to human-induced climate change. 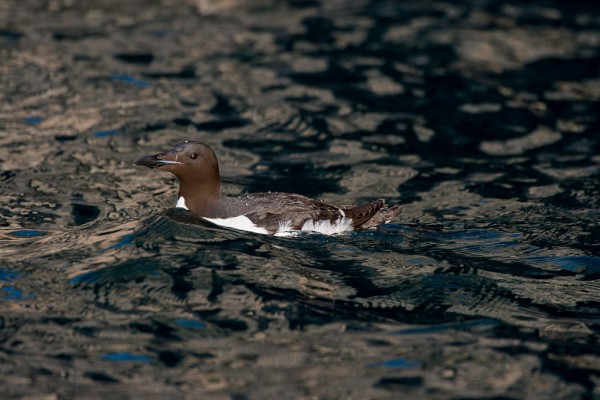 (Photo : Photo by Wolfgang Kaehler/LightRocket via Getty Images)
SVALBARD AND JAN MAYEN ISLANDS - 2015/07/19: A Thick-billed murre or Brünnich's guillemot (Uria lomvia) is swimming at the Alkefjellet bird cliff at Lomfjordhalvøya in Ny-Friesland at Spitsbergen, Svalbard, Norway.

Apparently, the said cold-adapted seabird has 'the lowest cooling efficiency' among others, "which means they have an extremely poor ability to dissipate or lose heat," said lead author Emily Choy, also a Postdoctoral Fellow in the Natural Resource Sciences Department at McGill University.

Although a few studies have explored the direct effects of warming and increasing air temperatures on Arctic wildlife, the study published in Journal of Experimental Biology is the first to tackle heat stress on thick-billed murres.

Thick-billed murres or Uria lomvia are birds from the auk family, distributed across the polar and sub-polar regions of the Northern Hemisphere, with a subspecies existing in the Arctic oceans of North America. Typically, they live in seawaters which remain below 8°C.

According to mortality reports of murres, they die from heat stress while nesting on sun-exposed cliffs. To measure the birds' heat tolerance, the team studied 30,000 breeding pairs from the cliffs of Coast Island in northern Hudson Bay using flow-through respirometry.

After careful examination, they have confirmed that murres indeed had limited tolerance of heat, with low maximum body temperature of 43.3°C. Their body's efficiency to cool down decreases when temperature in the air rises. This suggests that they produce heat at a faster rate than evaporating it.

Findings explain why these cold-adapted birds are dying on their own nests on warm, sunny days.

An 'Under-reported Impact' of Climate Change

"Overheating is an important and understudied effect of climate change on Arctic wildlife," Choy wrote.

"Murres and potentially other Arctic species are poorly adapted for coping with warming temperatures, which is important as the Arctic continues to warm."

This ecological consequence is a clear evidence that the root cause that is climate change should be addressed. At this time, less is known about the heat tolerance in Arctic seabirds, thus the lack of plan conservation plan to save them as the Arctic warms rapidly. Heat dissipation behaviors like heavy panting and wing spreading were already observed as some of the visible signs of overheating among murres.

The study also associated the recent heat waves in the Gulf of Alaska which affected the breeding season for murres. While some hypothesis of the birds' deaths was linked to 'ectothermic vice' where birds experience scarcity in food due to competition and reduced prey, research confirms that direct effects of heat stress have also contributed.

Also read: Mistaken to be Extinct, Sea Eagles Spotted in Loch Lomond for the First Time in 100 Years