A mudslide surged over a beach community about 60 miles southwest of Tokyo, sweeping away homes during Japan's rainy season, killing at least two people, and leaving at least 20 people missing. 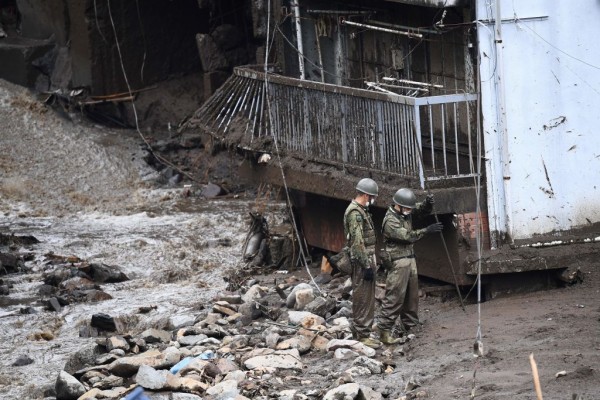 As residents watched in terror on social media, a massive black mudslide swept down a slope, swallowing houses and infrastructure.

The massive mudslide in Atami, Shizuoka prefecture, occurred about 10:30 a.m. local time on Saturday, following severe rain over the region.

Two ladies were killed in the landslide, according to an official from the city of Atami.

Police and firemen have been looking for the missing, and 19 individuals have been rescued after being stuck in their homes in Atami city. With 700 people from the police, fire department, and Japan Self-Defense Forces aiding, operations were halted overnight and restarted at 6 a.m. local time.

As of 6:30 a.m., 380 people had been evacuated, and ten evacuation centers had been set up around the city, according to an Atami municipal official.

The mudslide washed away more than 130 homes, according to Atami City's Fire Disaster and Management Agency. According to Sakae Saito, the mayor of Atami, up to 100 to 300 houses were impacted.

According to the Tokyo Electric Electricity Company, some 2,830 homes in the city lost power. Shizuoka's power had been mostly restored by Sunday.

On the Ground Experience

Yuji Shima, an Atami resident, was able to flee with his wife and mother but said he lost his home in the mudslide, which he described as "looking like a tsunami."

"The sound of the ground rumbling was the first thing that struck me. The air was thick with a dirty, chemical odor, which was understandable given how much was being washed away. It all happened in the blink of an eye, "he stated

"I've never lived through anything like this," Shima remarked, despite having lived in the region for 50 years and having seen typhoons and intense floods.

"I put my family's safety first. We had just arrived and had brought nothing with us. We had many individuals assisting us. Therefore we had food and drink, "he stated. "It's a miracle I'm still alive."

As torrential rainfall washes areas around the Pacific coast in central and eastern Japan, the government has formed a task group to respond to the catastrophe and gather information. 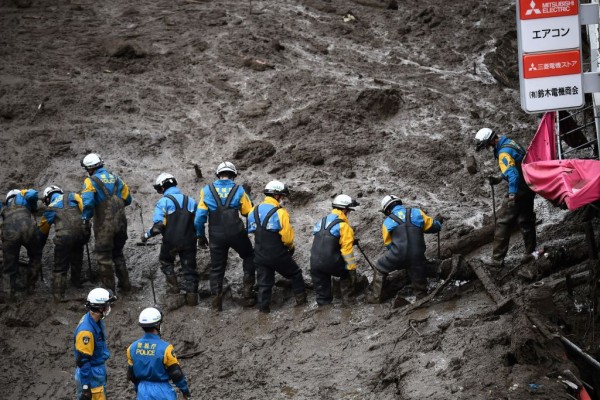 Prime Minister Yoshihide Suga of Japan offered his sympathies to the landslide victims and stated that emergency services were doing everything possible to preserve lives, rescue people, and assist with evacuations.

Suga went on to say that the seasonal rain front will continue to dump heavy rain over the country. He advised residents to examine local danger maps, pay close attention to weather updates and evacuation advice, and take steps to safeguard their loved ones.

At a news conference on Saturday, Shizuoka Prefecture Governor Heita Kawakatsu offered his "deepest condolences" to people impacted by the landslide and "those who have been forced to flee."

More rain is forecast, and people should be on the lookout for landslides, according to Kawakatsu. "The earth is loose in many places," he added, "so please evacuate from risky areas, listen to instructions from the city and town, and make sure you and your family are safe."

On Saturday, Taiwan's Ministry of Foreign Affairs sent a message of solidarity to Japan's government through Twitter, saying that Taiwanese people support the Japanese government "The news video that was shown startled and grieved them much. However, we stand ready to help Japan if it needs it."

According to Japan's national broadcaster NHK, evacuation orders have been issued for individuals in the Tokyo region and Shizuoka and Aichi prefectures. 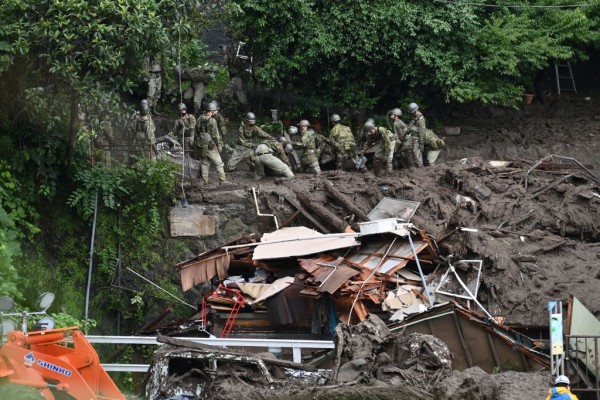 Authorities in Shizuoka, Kanagawa, Chiba, and Yamanashi prefectures have issued landslide warnings, according to NHK.

According to Japan's Meteorological Agency, the rain front is predicted to advance toward the Sea of Japan coast over the weekend, with areas near the coast expecting heavy rain on Monday and Tuesday, as well as landslides and floods in low-lying areas.

According to a 2020 Japanese government study, Japan is prone to landslides, with an average of 1,500 landslides per year in the last decade, increasing nearly 50% over the preceding ten years.

Flood-related disasters, such as landslides constitute a long-standing yet significant threat to the country. According to analysts, half of Japan's population and 75% of the country's assets are located in flood-prone areas.

"There are several risk factors in Japan that contribute to landslides. For example, due to its hilly topography and many areas where the soil contains volcanic ash, which is not as strong, it is vulnerable. "CNN spoke with seismologist and University of Tokyo professor emeritus Robert Geller.

Rainfall is increasing as a result of global warming, raising the danger of disastrous mudslides.

"Global warming is exacerbating the problem by increasing the frequency of rainfall, which can lead to dangerous landslides," Geller warned. "The wet season will continue for another week or ten days. We're probably getting more rain now than we typically do as a result of global warming."