Rattlesnakes Everywhere! California's Severe Drought is Forcing Rattlesnakes Out of Their Habitat

The severe drought in California is forcing hundreds of rattlesnakes out of their natural habitat. According to Len Ramirez, owner of a rattlesnake removal company, these past few days have been the busiest time for his business. 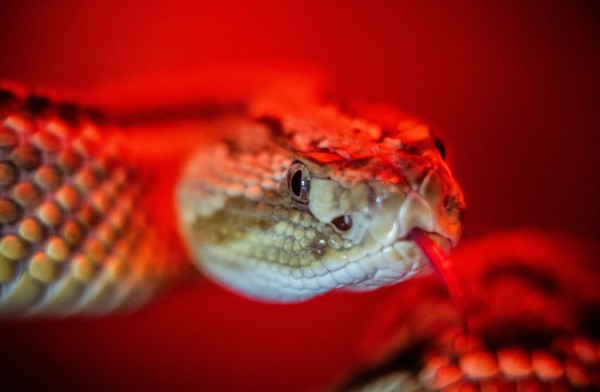 (Photo : Photo by INTI OCON / AFP) (Photo by INTI OCON/AFP via Getty Images)
A rattlesnake (Crotalus) is seen at veterinarian Jose Delgadillo's serpentarium in Matagalpa, 124km from Managua on March 26, 2021. - Veterinarian Alberto Delgadillo has a "collection" of more than 30 reptiles, for him, these reptiles are a blessing: he breeds, sells and offers them as photo models for humans looking for "extreme" experiences in Nicaragua.

Rattlesnakes may be seen on front porches, in potted plants, and under children's play equipment these days since it was rattlesnake season, he said. "This is the busiest I've ever been. Complaints have been received from around the state. The drought, according to Ramirez, may be partially to blame He started a company.

That has been in business since 1985 and has previously experienced surges. While he does not believe the rattlesnake population is expanding, snakes are increasingly making their way into cities in search of shelter from the rising temperatures and the withering landscape. It is not only snakes, either.

A terrible drought has gripped California and other states in the southwest. The circumstances have had far-reaching repercussions that go beyond the dangers of dwindling water supplies and increasing wildfires.

And, when once-wild regions are encroached upon by urban development, The California drought has worsened negative interactions among people, animals, and pests, all of whom are attempting to adapt.

Ramirez believes rattlesnakes are becoming increasingly frequent in the areas where we live, work, and play. He has become a go-to source for snake removal and public education since establishing his firm in 1985, speaking to the media and making safety movies for California's office of emergency services. He removes snakes from homes and public spaces and relocates them to areas where they are not inhabited.

Ramirez saw similar tendencies during California's drought, which lasted from late 2011 to early 2019. But, according to him, things have become worse since "there is so much construction going on, and that's going to displace animals, especially rattlesnakes."

He claims that he has worked tasks that required him to remove more than 60 snakes at once. "Being a good scout before your kids go out to play is something I constantly tell parents since it was rattle snake season," he adds.

Other wild creatures have been observed scouring the suburbs for water, food, and a break from the worsening circumstances as critical water sources run dry. The number of abandoned babies have been documented by wildlife vets.

Wildlife vets have observed an increase in the number of abandoned infants or wounded animals brought into their facilities, as well as an increase in animal sightings, particularly of bears going farther into urban areas told by ABC.

Also read: Snakes Can Store Sperm for up to 5 Years Before Getting Pregnant

The effect of California's drought

Public health officials in California have previously warned people of an increase in viral activity, and experts predict the threat of West Nile transmissions would grow as a result of climate change, particularly in California's coastal areas.

During droughts, bugs that are less dangerous may cause more issues. Ants, cockroaches, rats, and other visitors all require water to thrive, and they generally seek it out in human dwellings when it is unavailable outside.

"Not only does a pest's water supply dry up during a drought, but natural food supplies can also become scarce," says Mike Bentley, an entomologist with the National Pest Management Association. "When there is a drought, pests may often seek shelter in homes or other structures in order to survive."

The drought is not only causing a rise in unpleasant houseguests, but it is also affecting animal behavior. He describes them as "excellent at adjusting to change." "This might mean rats breeding in wall cavities instead of subterranean tunnels and eating trash bags instead of falling fruits and seeds. Alternatively, ants nesting in potted plants and eating on last night's leftovers."

Also read: Avoid These 4 Most Terrifying and Deadly Snakes At All Cost!