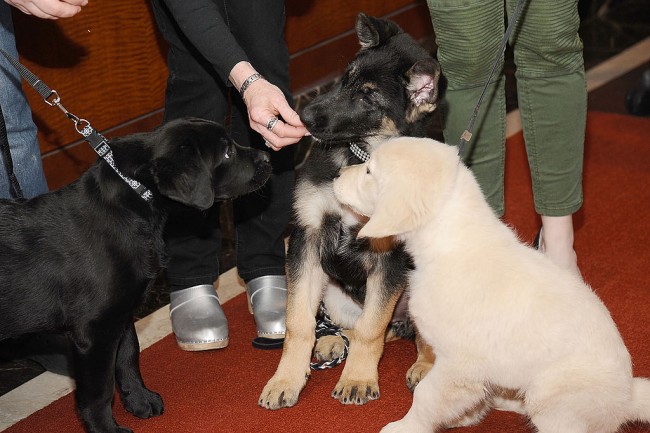 Domestic dogs did not just earn becoming a man's best friend, but they were born to be one. A study found that dogs had attributed some 'human-like' social skills even in a young age.

Emily Bray, lead author of the study at the University of Arizona said that 40% of dogs' recognition to human cues are acquired genetically and something that they already had in them prior to engaging with people, although their relationship and experience with their household do influence and nurture their behavior.

Researchers discovered that as young as a two-month-old puppy can already understand humans and follow their cues such as pointing at objects, but communicating back is something they can still develop later at life.

Bray and her team tested 375 8-week-old Golden retriever and Labrador puppies, old enough to be motivated by reinforcement (food reward), to find out if these skills set are realistic. They included 98 Labrador retrievers, 254 Labrador golden and 23 golden retrievers from 117 different litters, all with relatively similar rearing history and a notable pedigree from multiple generations.

Findings show that genetics is responsible for around 43 per cent of the variation in different puppies' abilities to follow finger-pointing gestures, including differences of their gaze and eye contact with humans when researchers performed 'baby talk' to the puppies.

Pointing at the cup where the food was hidden was recognized by the puppies nearly 70 per cent of the time. According to Bray, the high success rate of the experiment indicates that the puppies were not just learning to follow pointing gestures, but they already know how to do so, and when they were not directed in control tests, the random chance of not finding food under one of the two cups suggests they weren't merely smelling.

Puppies May Need a Little More Time to Communicate Back

On a third experiment, the team found that the puppies may be able to respond when humans initiate communication, but the ability to communicate back may need to come a little bit later.

Bray explained that dogs can reciprocate human-initiated communication even in a very young age and no prior human interaction. They were able to understand the social context we (humans) impose even before they leave their litter.

Other studies reported brain scans of dogs shows that they can process information similarly to that of human brain, with the right side dealing with emotion and the left processing meaning. Scientists say they are 'only truly happy if a praising tone of voice is matched by the actual words spoken.'

Bray and the team are convinced that dogs are biologically prepared to communicate with humans and their human-like social skills have a strong genetic component. This finding suggests that dog breeders or buyers can actually select a certain type of dog with good social skill as this is an innate trait. Lastly, their findings might contribute to understand how dogs in wolf populations have become domesticated.

Also read: A Dog's Long-term Stress can be Linked with Relationship it has with its Owner