A jaw-droppingly enormous shark cruising by a sailboat off the East Coast was a once-in-a-lifetime experience for maritime college students.

On Tuesday, student Alex Albrecht recorded the monster on tape from the SSV Corwith Cramer's rigging and shared it on TikTok. By Thursday, the video had been seen over 50 million times.

Albrecht saw the critter while onboard the boat sailing from Florida to Woods Hole, Massachusetts, for a Sea Education Association program on marine biodiversity.

Others may be heard screaming and shouting, "Oh, my God!" in the video.

"Whenever we wanted, we could climb up into the rigging, and I was fortunate enough to observe the shark from up there. "I was stopped with amazement when I first saw it, then called down to the folks on the deck below, 'big ass shark,'" Albrecht told Newsweek.

"I'd never seen one before, but a shipmate had seen one a few days prior from above. We estimated it to be around 25 feet long, although it may have easily been a little longer. We probably just saw it for around five minutes before it swam away." 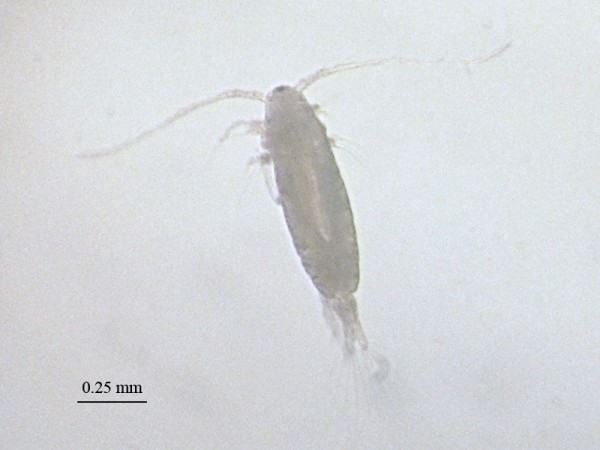 The massive beast was a basking shark, which can grow up to 26 feet long and weigh 11,000 pounds.

Filter feeders that eat plankton, the slow-moving sharks have jaws that may open up to three feet wide. 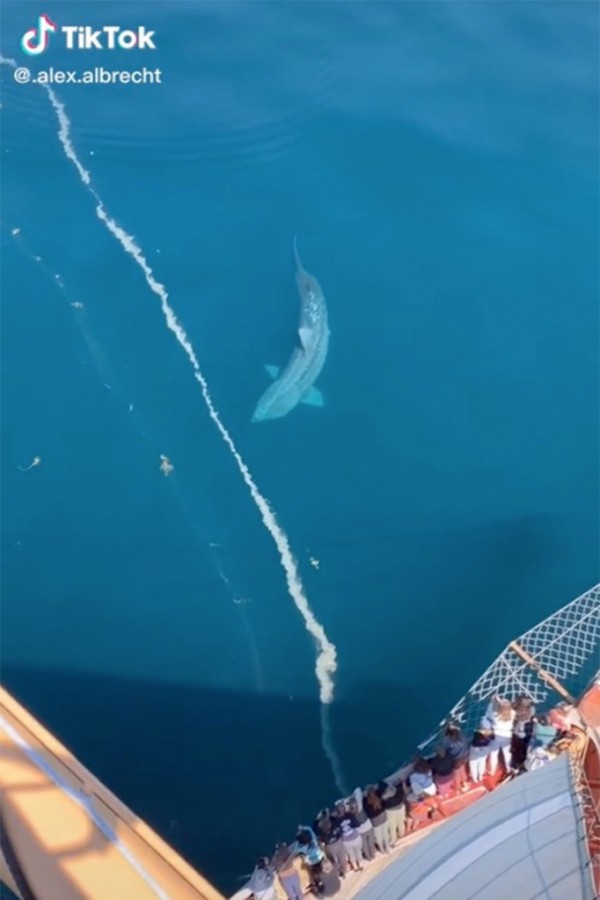 The kids cited the encounter as one of their greatest journey moments in a blog post earlier this month.

"There have been so many incredible moments to define this trip," bloggers wrote on May 15, "but today, there were two moments when the collective Corwith Cramer stoke tank was absolutely overflowing: two giant basking sharks swimming alongside whales and us lifting their tails out of the water to wave hello to all those who tried their hand at whale communication." 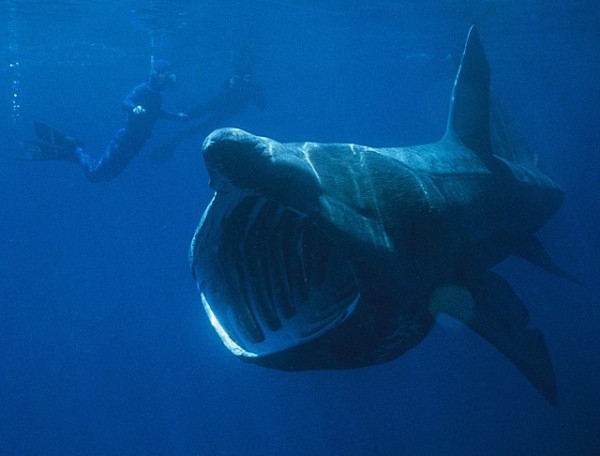 After the whale shark, the basking shark (Cetorhinus maximus) is the second-largest extant shark and fish and one of three plankton-eating shark species, together with the whale shark and megamouth shark. Adults may grow up to 7.9 meters (26 feet) in length. Its skin usually is greyish-brown and speckled. The caudal fin has a crescent form with a prominent lateral keel.

The basking shark is a migratory species that may be found in all temperate waters around the world. Its popular name comes from the fact that it feeds above the surface, giving the impression that it is basking in the warmer water. It possesses anatomical adaptations for filter feeding, including a big mouth and well-developed gill rakers.

It has a conical snout with gill openings on the top and bottom of its head. Plankton is caught when water filters through the mouth and over the gills by the gill rakers, black and bristle-like. The teeth are numerous and tiny, with up to 100 teeth per row. The teeth on both the upper and lower jaws have a single conical cusp, are bent backward, and are identical. This shark has the smallest brain size of any shark in weight, which reflects its sedentary lifestyle.