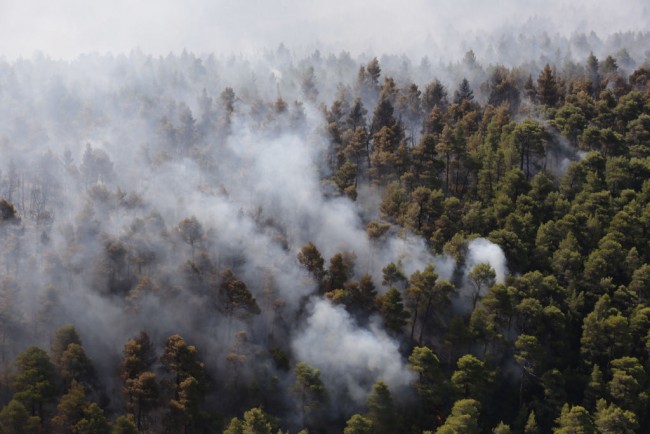 EVIA, GREECE - AUGUST 14 : Smoke rises from the forest as a wildfire burns near the village of Stavros on the island of Evia, Greece on August 13, 2019. A state of emergency has been declared on the island of Evia and several villages have been evacuated, displacing hundreds of residents whilst firefighters attempt to control the wildfires.
(Photo : Photo by Milos Bicanski/Getty Images)

The fire season in the far North usually starts early June when ice from heavy winter has melted. However, as global temperature rises, zombie fires had gone prevalent a little earlier in the frozen Arctic and can become more common in the future.

The occurrence of Arctic 'zombie fires' is not exactly a new phenomenon. These supposedly dead fires leave remnants from the previous year's burns that somehow stayed alive fed by fuel-rich soils in the Northern Hemisphere and supported by available oxygen underground through the long winter.

Back in May of 2016, scientist Sander Veraverbeke of Vrije Universiteit Amsterdam suspected that lightning storms in the region triggers Arctic fires in North American boreal forests. Veraverbeke said that flames popped again on edges where fire emerged from the year before and seemed to survive winter. Researchers attempt to understand the widespread of these zombie fires and why they are becoming more frequent these days.

Authors Rebecca Scholten, along with Veraverbeke and other co-authors found in a study that occasional flare-ups are relatively associated with man-made climate change. Zombie fires were responsible for just 0.8% of land burned by fire in most years and a total of 0.5% of the total carbon emissions released by fires in Alaska and the Northwest Territories. However, these fires burned 50 percent more acreage each year in the Arctic in 2007, 2008 and 2010.

In addition, carbon-rich peatlands in high-latitude boreal forests, when burned, emits more carbon than similar fires in places like California or Europe. Since 2020, Arctic fires has warmed the planet twice as fast as other fires, releasing almost 250 megatons of carbon dioxide. Statistically, this is about half as much as Australia's annual emission from human activities and about 2.5 times as much as the record-breaking 2020 wildfire in California.

Also read: 21 People Drop Dead in Ultramarathon in China Due to Extreme Weather

Fire Potential in the Arctic can be more Frequent than Expected

Randi Jandt, a fire ecologist with the University of Alaska, Fairbanks said that zombie fires also called "overwintering" or "holdover" fires do not happen very often, but her opinions changed after 30 years of observation.

The 2019 Alaska fire burned over 2.5 million acres, which continued until the end of the season. Just as the fire team thought they have put out all the blazes, plumes of smoke began reappearing in early May when ice in the region started to melt, just before the fire season was expected begin.

These little hotspots are being carefully track across the Arctic through satellite imageries. The team went through satellite images in the last 20 years of the boreal forest regions of Alaska and the Northwest Territories and found that less than one percent of all the burned area in the regions was caused by zombie fires. Apparently, zombie fires can smolder for months and the intense climate change increases fire potential in the Arctic.