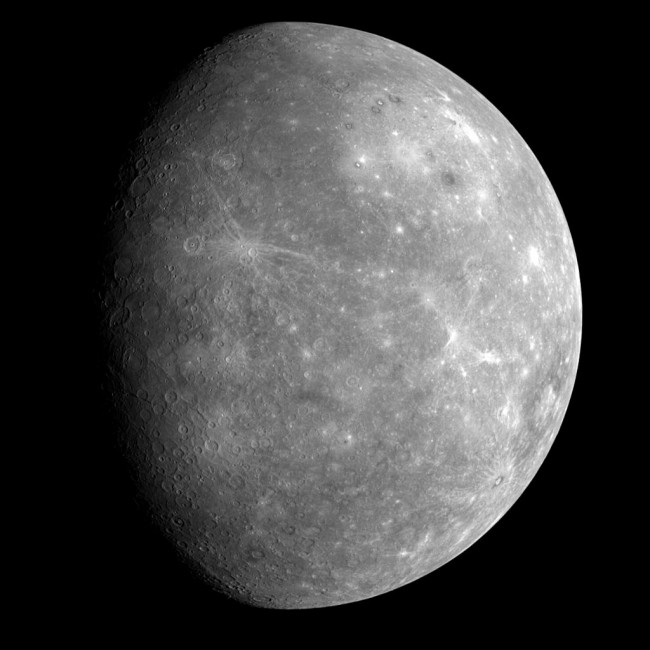 IN SPACE - JANUARY 14: The planet Mercury is shown from a distance of approximately 17,000 miles, taken by NASA's Messenger spacecraft January 14, 2008 at the spacecraft's closest approach to planet. The image shows features as small as six miles in width. Similar to previously mapped portions of Mercury, this hemisphere appears heavily cratered. On the upper right is the giant Caloris basin, including its western portions never before seen by spacecraft. Formed by the impact of a large asteroid or comet, Caloris is one of the largest, and perhaps one of the youngest basins in the solar system.
(Photo : Photo by NASA via Getty Images)

It's that time of the year again where Mercury works wonders for sky observers. Starting tonight, Mercury reaches its greatest elongation, standing apart from the sun as far as it gets. As Mercury makes its way to be the "object of the week", people in the west should look out for what to watch in the night sky this week and how to watch it.

Technically, Mercury, known as 'the Swift Planet', lying closest to the sun, has been revealing itself in the night sky during its April-June apparition, but tonight may highlight Mercury's best apparition of the year, Forbes say. During the 2021 apparition, Mercury will lie 22º east after sundown and an occurrence of the Super Flower Blood Moon Ramatic Total Lunar Eclipse next week.

Over the centuries, astronomers have been observing Mercury with telescopes. Mercury has been zipping around on an orbit with enough roundness that dramatically change the size of the stars between its closest and farthest points.

Monday, May 17, is 'Mercury May' where the innermost planet goes farthest from the sun and the best night to watch the planet rise highest in the west some time after sundown. The now 32%-lit Moon moves in front of the mighty Beehive Cluster (M44) on Tuesday, May 18.

This is one of the nearest open clusters to Earth, in the constellation of Cancer, with its 1,000 stars beautifully observed through binoculars. The cluster will appear under 3º apart in the post-sunset night sky.

When the moon reaches First Quarter on Wednesday, May 19, the earth will be lit by 53%, with the moon just 5° from Regulus, the brightest star in Leo, the Lion. Meanwhile, what to look for on Sunday, May 23, is the Spica, one of the 20 brightest stars in the night sky and about 250 light-years far.

It will be visible as it uses the now 92%-lit Moon, 6.5° away. Another way to find this binary star system at this time of the year is through the constellation Virgo, or by tracing the line of the Big Dipper's handle to 'arc to Arcturus, spike to Spica'.

Coma Berenices is considered the 'Constellation of the Week' and is definitely worth to watch. It consists of three stars forming an L-shape, sandwiched between Boötes, the Big Dipper and the tip of the tail of Leo, the lion, which is also reasonably close to orange star Arcturus.

Watch out for the Beta Comae Berenices, the brightest star in Coma Berenices found in the middle which is approximately 30 light years away.

In addition, 20 or more bright and many dimmer stars will be visible through your binoculars. These stars are part of an open cluster called the Coma Star Cluster or Melotte 111, with around 288 light years distance, making it one of the nearest star clusters to our Solar System.

Also related: Youngest Volcanic Deposit from Mars Could Mean Life on the Planet