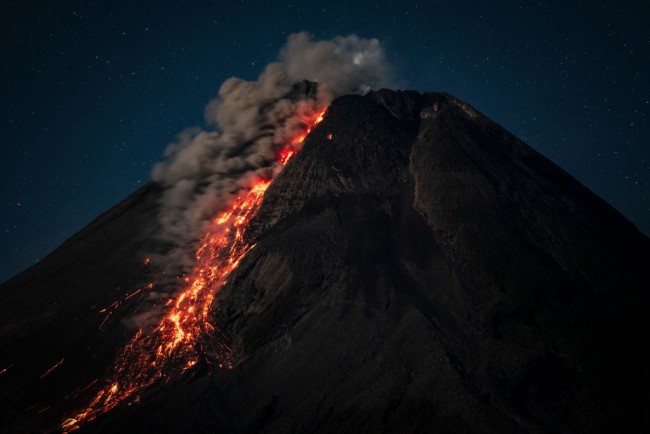 YOGYAKARTA, INDONESIA - APRIL 24: Mount Merapi spews pyroclastic flow as the volcanic activity increases on April 24, 2021 in Yogyakarta, Indonesia. Authorities issued a level three alert since November 5, 2020. Mount Merapi, 2,968 metres high, is known as one of the most active volcanoes in Indonesia, with an eruption occurring every two to five years.
(Photo : Photo by Ulet Ifansasti/Getty Images)

As the name implies, supervolcanoes are those whose eruptions had historically been of catastrophic proportions. And for a long time, the one that has had most people's eye on is the world-famous Yellowstone Caldera in the Rocky Mountains.

That, however, may soon change as Italy's own Campi Flegrei may have already surpassed it in terms of danger scale.

What makes a dangerous volcano?

Now, to understand the danger, it is first important to know how precisely supervolcanoes work and how they are generally created.

Much like other volcanoes, supervolcano eruptions are the result of magma rising to the crust. But in their case, there are no immediate exits that could relieve the building pressure to cause a normal eruption. This causes the magma to accumulate, reaching dangerous and potentially explosive levels.

To date, it is said that a supervolcano eruption is precisely what made the Yellowstone Caldera into what it is today (which took place roughly about 600,000 years ago). This, however, was just one of a handful of calderas created when a volcanic hotspot formed underneath this part of the North American tectonic plate.

In contrast, Campi Flegrei (also known as the Phlegrean Fields) is more well-known for the sight of numerous craters and sulfur geysers that dot the landscape, all the way to the Mediterranean. Its most recent major eruption happened in 1538, when it formed the Monte Nuovo and buried the lost village of Tripergole.

According to some experts, the proximity to urban areas is what has made the Campi Flegrei caldera more dangerous than Yellowstone's (although the impact on the local ecosystem should still be a cause for concern).

Even the smallest eruption in the Phlegrean Fields (including the sort that would not even be enough to alter global temperatures), would affect the city Naples (which is only about 18 kilometers away).

Such an event would require the immediate evacuation of its three million residents as it would usually entail rains of ash and the threat of hot, falling debris. The Monte Nuovo eruption had lasted about a week, therefore it is possible that the next one could last just as long.

The good news though is that volcanologists are actively studying the site and assure the public that the conditions for an actual supervolcano eruption are still to be met. The intensity of a volcanic eruption is dependent on many things. This includes not just the temperature of the magma itself but also its chemical composition.

For now, researchers agree that there are signs of a buildup happening. But when this may culminate in any serious eruption is still not known. It is likely that the magma must achieve a more volatile composition in order for it to start bursting through craters (or create new ones). Alternatively, seismic activity could help it along.

In any case, this still all falls within the realm observation and citizens are more likely to be prepared by the time conditions for super volcano eruption are imminent.