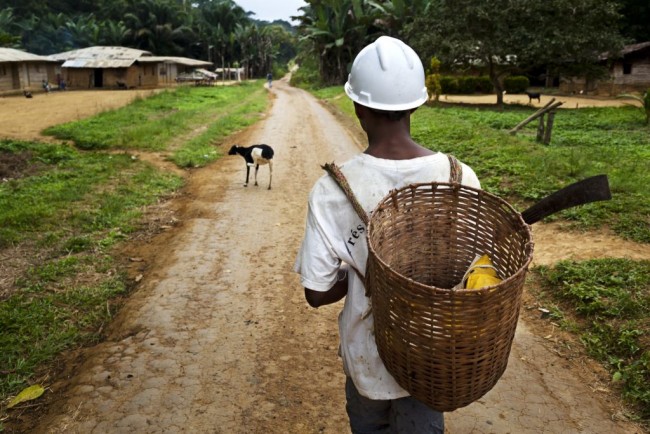 NYABISSAM, CAMEROON - JULY 27: A virus hunter at work in the forests of Nyabissam, Cameroon, July 27 2011. The man works with Dr. Nathan D. Wolfe, who is currently Director of the Global Viral Forecasting Initiative and the Lorry I. Lokey Visiting Professor in Human Biology at Stanford University.
(Photo : Photo by Brent Stirton/Getty Images)

This year marks the fourth year of an on-going drought in the country (particularly the southern region). It has left farmers with decimated harvests, skeletal livestock and countless families facing malnutrition.

About only 50% of rainfall was experienced last year during planting season and the economic impact across the poorer regions has reached all the way to COVID-struck urban areas.

Agriculture is a major contributor to the nation's main exports but most of the country remains an arid desert ecosystem, meaning farm life there is as difficult as anyone can imagine. The present drought has left areas in the south most badly affected. Without the normal yields of the annual harvest, farmers are facing smaller income to take home to their families and that includes less food, followed by deteriorating standards of living.

The heat waves have also affected the other means which people traditionally used to survive. When the seasons are lean, the locals would still try and forage for wild cactus fruit to eat and sell. But with the rising temperatures of global warming, even foraging is no longer enough as the temperature is slowly killing many endemic desert plant life. Dangerous sandstorms have also been on the rise, making trips across the area more difficult than it has been in many years.

The situation is so dire that there are even reports of people desperately mixing clay to their food just for the sake of filling empty stomachs. In response, malnutrition clinics are mobilizing to treat the hundreds of children who had been terribly affected by the crisis.

During the onset of the drought, many families from southern Madagascar were slowly migrating to urban areas in order to find alternatives to a drying agriculture industry. But because COVID has shut down tourism and other establishments, poverty has seen a rapid increase during the pandemic. Education is also in decline, as poor families from the agricultural sector can no longer afford tuition. All the while, the double disaster has spelled an 85% increase in the nation's hunger crisis.

All things considered, all of these are grim signs that climate change is already having a devastating chain reaction on the welfare of poorer countries. Many of these states are heavily dependent on agriculture yet are also faced with the challenge of managing agriculture's carbon footprint. It does not help that many developed countries are fueling the demand for their agricultural exports.

A lot of this has to do with the uncomfortable fact that agriculture has traditionally required the destruction of forest habitats in order to make room for fields. In Madagascar, this includes the destruction of its small but one-of-a-kind ecosystems that are home to dozens of endemic wildlife. More importantly, the tropical canopy also stands as one of the few natural carbon sinks left in the world.

As always, the best way out is for a massive reform, both to the country's own economy as well as the global economy as a whole. Climate change is the next big threat beyond the current pandemic and the state of Madagascar shows.