Welcome Aboard 'The Manta': Efficient Plastic-Feeding Yacht That Cleans the Ocean!

Plastic waste is a grave threat not just to the ecosystem, but to economy and human health. That is why Yvan Bourgnon, a professional yacht racer, and his team decided to take matters in hand and designed one of the largest plastic-feeding yacht on the seas they call 'the Manta'.

The unique idea will be made possible through the SeaCleaner's Project. 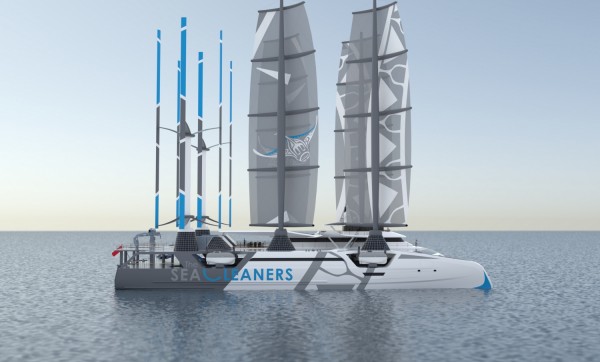 Yvan has sailed around the world since he was eight with his parents. The sea adventure has always been his dream since then. Over the years of his voyage, he noticed that marine plastic waste has become more constant. This inspired his idea of 'the Manta', a 56-meter (184 feet) long catamaran propelled by a combination of high-tech sails and electric motors.

The sailing vessel is equipped with a conveyor belt which scoops up trash as small as 10mm over which the Manta glides. It can collect up to 3 tons of waste per hour and its three trawl nets trap plastics to depth of 1m mainly in coastal water to avoid harming sea life.

On the sorting unit, crews segregate the wastes manually by melting plastics for energy, recycling metals and returning organic materials to the ocean. As for the wastes on shallow or narrow areas, the Manta has modulus two multiservice boat on board to do the work.

A special feature of 'the Manta' is its waste to energy conversion unit. The plastics collected by the giant sailboat can power itself by melting the plastics to produce gas which drives a turbine, and in turn power all the Manta's equipment. Along with solar cells and wind turbines, the boat will be 70% self-sufficient in energy and 100% in waste management.

On top of that, heat emissions and waste gases from the conversion process will be recovered to live by the Manta's principle of ecofriendly solution.

Finally, scientific missions will be hosted directly on board, referring the Manta as a state-of-the-art science lab on plastic pollution. The vessel will have designated stations where marine biologists and chemists can study the effects of plastic on the ecosystem, as well as spread awareness and prevention platforms to the general public during boat stopovers.

Also read: Coronavirus Casualties: Plastic Waste Amid Pandemic is Killing Animals All Over the World

While the Manta is designed with genuine intention to fight against plastic pollution, some has raised queries about its risk to marine life. Eric Le Plomb, Head of Scientific Operations at Manta Innovation explained that their main concern is protecting marine biodiversity, thus the invention of the Manta.

Le Plomb said they have experts on the team and made sure that they have the necessary information on the development of the systems and design of the boat in order to minimize interactions with marine biodiversity.

While 'the Manta' is still a concept at this time, Bourgnon and his team hope to make this into life and have the prototype operate as soon as 2024.

Also read: Here's How You Can Help Turn the Tide on Plastic Waste Problem