A scary photo of one of the most venomous creatures in the sea has circulated online after two day-trippers found the fish while they were kayaking.The two kayakers were paddling in waters close to Townsville in North Queensland on Sunday when one of their paddles hit an object which turned out to be a stonefish.

The kayakers lifted the oar and were frightened to discover a stonefish, one of the most venomous fish in the ocean, hanging off the paddle. 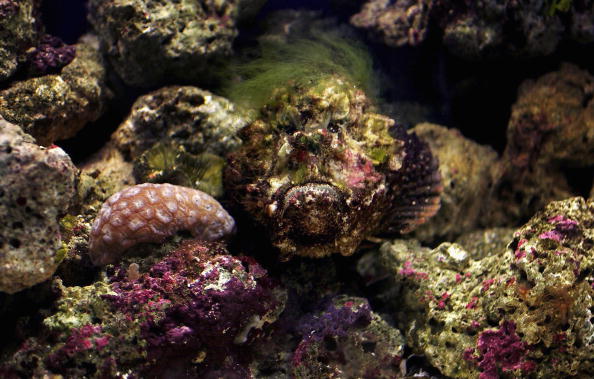 Photo of the Venomous Fish

A  woman captioned the photo that was shared to the Australian Native Animals Facebook page saying she didn't get to have a glance at it but her partner and friend viewed their first wild stone fish close to Townsville. The photo of the venomous fish has since been bombarded with hundreds of reactions and comments.

One of the commenters commented: "'Had a friend step on one these ugly things around 20 years ago - they were in the hospital for about three months, almost died two times."

Most viewers mistook the scary finding for another brown item. Stonefish are the most venomous among all fishes and possess 13 stout spines in their dorsal fin which introduces a very toxic venom.

Most usually discovered in waters that are not deep in northern Australia, most stonefish stings happen due to stepping on the creature and can lead to death if not treated.'The venomous dorsal fin spines can lead to extremely painful injuries and other acute medical problems,' according to the Queensland Museum website.The pain occurs immediately, it is very painful and may last for many days.

Breathing difficulties, muscular paralysis, shock, and at times heart failure and death can occur. People that visit the beach are advised to put on strong footwear when on reef flats, or while paddling on soft-bottom substrates close to weedy or rocky areas. If you are stung by this venomous creature, apply hot water to the area affected and seek medical attention instantly. Stonefish has led to at least one death of a 53-year-old man, in 1915, one fateful Thursday on an Island off the coast of Cape York Peninsula in Far North Queensland. Last Christmas, a boy, who was nine-year-old was stung by a venomous fish while playing in shallow water on Queensland's Sunshine Coast.

He had two of the 13 spikes of the stonefish stuck into his foot, which leaked venom and he was not able to walk for two about days, as his mother issued a desperate plea to parents.

Stonefish are the most venomous among all fishes and are commonly found in coastal rivers in the northern half of Australia.

The fish typically remain motionless and bury themselves in rocky reefs. Stings usually occur on the feet of swimmers, so be careful whenever you are swimming. Anyone stung by this creature should leave the water and get medical attention as fast as possible.

Tags Stone Fish, australia, Most Venomous Fish in the World