Millions of social media users have been touched by an unexpected relationship between a parrot and a puppy. 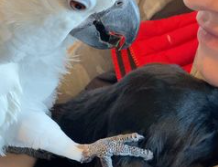 Wendy Albright of Idaho said her cockatoo parrot Sweet Pea soon became a social media phenomenon after posting a too-cute video of her pet parrot meeting her puppy for the first time.

Albright, who had already been uploading hilarious Sweet Pea videos to TikTok, wanted to record her parrot's reaction to meeting her tiny black Lab on March 23.

Sweet Pea brushes the puppy's head with her foot in the clip and also tells the dog, "I love you."

Albright told local television station KTVB, "I was keeping the puppy, and the puppy was sleeping, and I allowed Sweet Pea to come to meet the puppy."

Albright said she got "thousands of updates" on TikTok after uploading the lovely video.

The video has gained over 27 million views and 4.9 million shares to date.

"I think the nation, at this moment, saw the video and just enjoyed the unadulterated love of two animals just caring for each other," Albright said.

Albright has continued to record Sweet Pea's encounters with her puppy and post them on TikTok due to the video's popularity.

Sweet Pea, whom Albright met on Craigslist, takes toys to the puppy's crate to play with him after a nap in one video.

Albright captioned the video, "Wake up and play with me!!"

Inside, the puppy can be seen playing with Sweet Pea and watching the cockatoo as she runs across the front yard.

Friendship in the Animal Kingdom

Although MOST animals make friends, only a few species are worthy of genuine friendship. Higher apes, members of the horse family, elephants, cetaceans, and camelids are within this select group of mammals. All of these species live in stable, partnered social communities, which is no coincidence. Living in a group has its perks, but it can also be tricky because one can't quit when things get rough, where friendship comes in. Friends form protective coalitions that keep everyone else at a safe distance without completely keeping them away.

Social media is filled with viral posts of unlikely animal friends, from the common cats and dogs to rats and birds. Situations like these are called Interspecies friendship.

Interspecies partnerships like Sweet Pea's puppy pal show that everyone can get along if they really try.

Interspecies friendship is analogous to mutualism in that it involves two people from different species living in a partnership in which each organism profits from the other's behavior. Friendship techniques for chickens use this tool. Domestication, interspecies contact, mutually beneficial exchanges, the need for social bonding, security, and other factors all play a role in the forming of interspecies friendships.