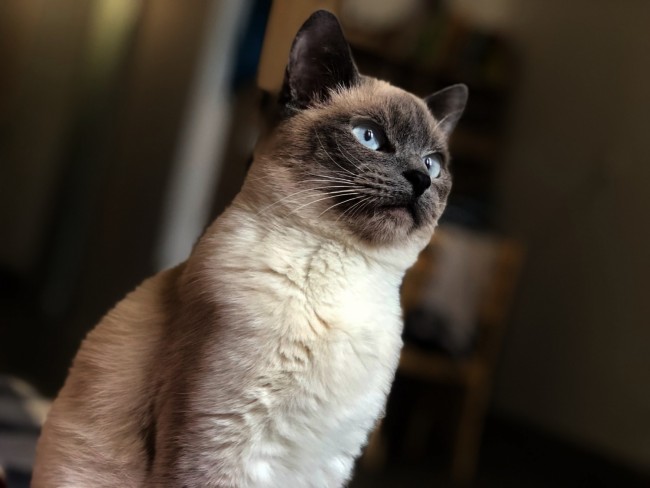 The Siamese is one of the most well-loved cat breeds in existence. Iconic and readily identifiable, they make amazing animal companions. Whether they will be a 'single child' or part of your pack, their bold and playful personalities make them amazing company to have around. They also possess a rich history and are steeped in the strange. Let's explore some of the weird facts about our furry friends!

They Have Developed Their Own Folklore

The Siamese cat's unique features like their crooked tails and crossed eyes are due to their genetics. However, before we understood this they cultivated their own mythology about how they got their appearance.

The legend tells of two Siamese cats who were charged to stand watch over Buddha's golden chalice during a time of great turmoil. Their names were Chula and Tien, and during their time together, Chula became pregnant. Tien became bored of his duties and wandered off, but Chula remained steadfast in her task. As she was alone, there was no time to rest, so she wrapped her tail around the goblet and held it so that she would wake if anyone were to disturb it.

During her waking hours, she held such a close vigil that her eyes crossed, and from many long nights of wrapping around the goblet her tail developed a curve that could not straighten. So devoted to her task was she, that the marks of her great deed were born upon the faces and tails of her kittens when they were born, making their bloodline a very special one indeed.

They have very strong opinions - and will tell you what they think.

Everyone knows cats meow, but did you know that cats in the wild do not meow as house cats do? It is a trait they specifically developed during their development among us as vocal creatures. The Siamese cat, however, is exceptionally vocal and considered to be the most vocal. They possess a robust voice and a vocabulary of endearing sounds with which they are sure to make their innermost feelings known.

While you may not always understand each other, many Siamese are considered strong conversationalists.

It's no wonder that a feline friend of such refined beauty has ties to the nobility. It was once held that only the royal family could keep a Siamese cat as a companion. While any cat would eagerly remind you that they were once worshipped and considered sacred, this specific breed has the most recent claim to fame.

In fact, the second tale about their tail and how it got its signature appearance stems from one dutiful cat who allowed the princess to use his tail as a ring holder while she bathed. Even in ancient times, they were recognized and valued for being steadfast companions.

Not Your Everyday House Cat

While many cats are content to lounge around all day until they decide to cause night mischief while you're trying to sleep, the Siamese is known to be a very active and playful companion. They are considered by some to even be dog-like in their behavior.

Because of this, mental stimulation and engagement are especially important. Don't be afraid to play a game of fetch or provide them with plenty of fresh toys to keep themselves occupied.

The Genes That Determine Their Color Are Incredibly Complex

Everyone knows that genetics determine the color of a cat's coat. Surprisingly, the Siamese's unusual modifier gene causes the depigmentation - the lack of color - genes to only activate in areas of warmer body temperature. Because of this, the cooler parts - known as the 'points' where their colors manifest - do not experience activation of the gene. That's why the points only occur specifically on their tails, face, ears, and paws.

In fact, it was noted by researchers that Siamese cats relocated to significantly colder climates experienced minor deepening of color when their new coats grew in.

As you can see, the Siamese cat is filled with intrigue. It's no wonder that are so often chosen to be the animal stars of many iconic cat movies, with their striking features and charming personalities. Do you think such a marvelous and unique companion could be a good fit for your family?