Ever since we were young, everyone was taught that light helps plants grow-sunlight in particular. But, a recent study showed that it's not just the light emitted from the sun that allows our flowers to bloom.

When one thinks about colored lights, it's fair to say that many people immediately have metropolitan city lights in mind. And, well, they are not wrong. Metro cities are indeed filled with glistening lights. Many would even say that the lights of the cities are what makes them, well, shine. But, a group of scientific innovators had another thing in mind.

Daan Roosegaarde, together with his team from Studio Roosegaarde, started his latest project called Grow. In the project, Roosegarade and his team swathed a little over 215,000 square feet of leek crops and exposed them to red, blue, and ultraviolet (UV) lights. 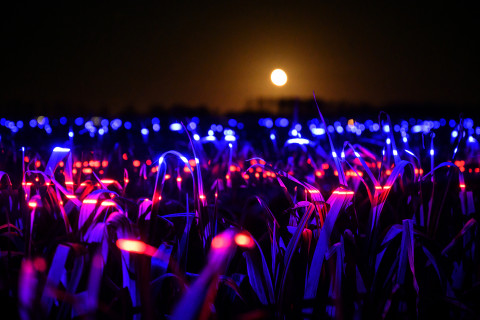 The team turns the lights on every night.

When onlookers who had no idea what the lights are shining upon first take glances at the plants, no one would think it's a leek farm.

According to Roosegaarde, the project is an "homage to the beauty of agriculture." However, the lights were not only for aesthetics, but the main purpose behind the different colored light sources is that the team wants to highlight the incredible science behind how various light sources help a plant grow.

For years, many botanists and biologists have been using LED lights for greenhouses, vertical farms, and other indoor harming types.

They found out that red and blue lights can provide some benefits to plants. Ones they don't usually get from the sun. Red lightwaves help plants grow, and blue allow them to flower.

If you think of red and blue lights as raw ingredients, you can customize the perfect lightwave "recipe" for your plant.

If the method is already being used by many scientists, what makes Roosegaarde's experiment special?

The practice of using colored lights to help plants grow is commonly used for indoor farming. Only a few, aside from Roosegaarde, actually utilizes lights for outdoor farming.

Aside from the common red and blue lights, Roosegaarde's studio also uses UV. Ultraviolet rays are said to help plants build up resistance from the elements.

According to Roosegaarde, the experiment can help reduce the use of pesticides and helps the crop grow. Doing so would make the plant more sustainable and eco-friendly.

"Grow," the public artwork, is inspired by this science; Studio Roosegaarde partnered with Rabobank and Wageningen University on the project.

Four units run on solar-powered batteries that project a particular "light recipe" of red, blue, and UV light on the farm's leek crops.

While the light seems to bathe the hills as far as the eye can see, Roosegaarde says it's actually exact: When activated, the light shines horizontally so that there's no light pollution. Simultaneously, beaming the crops after the sun sets actually extends sunlight for a few hours.

Grow can be seen as an alternative farming method that uses lesser chemicals than traditional farming.

According to Roosegaarde, "By showing the beauty of sustainable agriculture and how light design can help speed up sustainability, it helps people."

The team aims to teach their method around the world by going to 14 other countries and doing the experiment on indigenous plants to show people how beneficial the new method is.