Fascinating! These Fishes Have Two Wide-Angle Cameras With Lights

Engineers at Harvard University have developed a school of seven robot fish that can swim in circles without crashing into one another. The robot fish can swim in real-time just like real fishes..

Previously, researchers have tried to make robots coordinate themselves in water but have failed. Recently, a team of researchers from Harvard University has succeeded in developing a swarm of robotic fish that can swim without crashing into one another.

The engineers developed swarms of robotic fish that coordinate their movement through a centralized computer. The computer gives them directions on where they should go in the form of GPS coordinates.

Inspiration to Develop The Robotic Fish

Watching the movement of fishes in an aquarium can be intriguing but the engineers were inspired by two ways fishes sense their neighbors,which is by bioluminescence and vision.

In the subsequent steps to achieve their goal, the engineers developed a suite of algorithms. The algorithms were hard-wired into the fish to coordinate collective behaviors ranging from swimming in a circle to scattering into the far reaches of their tank.

They conducted a series of tests over about 1 year. Eventually, the fish bots performed movements successfully. The video screen showed how the fish bots transition between behaviors effortlessly.

The synchronized fish bots became the first underwater swarms that can coordinate their behavior independently without a centralized computer, said researchers in the Science Robotics. However, before the fish bots are released into the ocean, scientists need to design another way they can recognize each other. Perhaps, striped schooling marks. 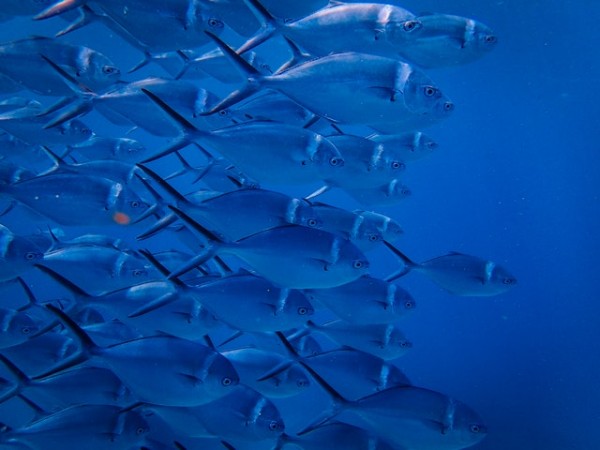 The synchronized fish bots have fascinating capabilities. For instance, the fish bots demonstrate complex, synchronized behaviors that enable them to help migrate, evade predators, and find food without any of them coordinating their movements.

This is the first time fish bots perform synchronized movements similar to a real-world school of fish without any external influence or control. Meanwhile, the team said a school of robotic fish can be mobilized to perform searches and environmental monitoring in fragile environments like coral reefs.

The fish bots, named Blueswarm, operate in 3-dimensional spaces such as air and water. Also, they navigate using blue LED lights and cameras. "Robots are often deployed in areas that are inaccessible or dangerous to humans, areas where intervention might not be possible."The first author, Florian Berlinger said.

Therefore, using a 3D visual perception and implicit rules, the scientist created a system that has a high degree of autonomy and flexibility underwater in the absence of GPS and WiFi.

Dealing with sophisticated technology such as robots, the researchers developed a vision-based coordination system in the fish bots based on blue LED lights to overcome challenges likely to come from operating in a 3D space.

Every fish bot, called Bluebot, had two cameras and three LED lights. The cameras help to detect LEDs from neighboring Bluebots and use customized algorithms to determine their distance, direction, and direction they are heading.

The underwater fish bots were created in the lab of Radhika Nagpal at the Harvard John A. Paulson School of Engineering and Applied Sciences (SEAS).